The second major comic book adaptation of the summer is a strange beast indeed. Not quite a full on reboot of the original franchise and also not really feeling like a true prequel. It injects new life into the tired franchise (after the abysmal third instalment and the unremarkable Wolverine spin-off) under the confident direction of Matthew Vaughn. Vaughn teams up with Kick-Ass writing partner Jane Goldman, and new additions Ashley Miller and Zack Stentz (who both recently wrote the screenplay for Marvel’s Thor), to deliver a film full of heart, depth, action and above all fun.

Dealing with the emergence of the mutant race on the world stage, the film follows both Charles Xavier’s (James McAvoy) and Erik Lehnsherr’s (Michael Fassbender) (Professor X and Magneto) stories. From the start the film parallels these characters lives, as we witness Charles move from privileged, but giving, young boy to a graduate professor of genetics. In contrast Erik’s journey starts with tragedy at the hands of the Nazis, which leads him on a globe-trotting quest for revenge. This sets the stage for the non-to subtle ideological differences between the pair. Charles, full of hope, considers mutants can be assimilated into the human populace through peaceful understanding, whilst Erik, consumed by his rage, believes that mutants are the dominant form of life and should take the world for themselves. It may be the tired old formula of the previous X-films but here, through the script and the excellent lead performances, it is given more weight. With both Charles and Erik playing off each other and forging their respective destinies onscreen.

Arguably this is Erik’s film (an evolution of the planned Magneto spin-off perhaps), as he cuts a bloody swath around the world in pursuit of his ultimate revenge. Fassbender captivates with the most well rounded fall from grace in a blockbuster I can recall. His portrayal of Erik as a strong willed individual consumed by his past and at the same time a lost soul looking to connect is utterly compelling. His friendship with Xavier and its ultimate outcome is one of humour and heartbreak as we go through the emotions with him. Not only that but his Erik is deadly and the use of his power as “the master of magnetism” is both subtle and awe inspiring at the same time.

However Charles isn’t simply washed aside. This is perhaps the first time that the character has seemed truly

human on the screen. That’s not to say Patrick Stewart didn’t do a fine job, but McAvoy’s Xavier is a playful one downing drinks and chatting up women. This is in stark contrast to the caring teacher we know from the previous films. He is the young idealist, excited about the prospect of discovering more mutants. In fact I would argue that Charles would get a lot a laughs with audience. Also much like Erik the film fully flaunts Charles powers, from showing him looking through memories to possessing people.

Thrown into the mix is the creation of the X-Men’s first class of mutants, Kevin Bacon’s megalomaniac villain and the fact it is set in 1962 with the Cuban missile crisis looming in the background. Now not all of these pieces fit as smoothly as one would hope, but the films weaker elements never detract from the overall experience.

The handling of the newly discovered group of X-Men is extremely well done. They’re chemistry onscreen is palatable and the scene where they give each other codenames is both adorable and fun. Out of them Mystique (Jennifer Lawrence) is given the most development, followed closely by Beast (Nicholas Hoult). Both of them are repulsed by their mutations, Mystique always stays in ‘human’ form instead of her blue one and Beast never takes his shoes off to show his ‘ape feet’. Through this common thread they come together and both of their character arcs are satisfying (and also are in the true spirit of the comic). The rest of the team is rounded out by Banshee (Caleb Landry Jones), who has a sonic scream, Havok (Lucas Till), who creates destructive energy Frisbees (it makes sense when you see them), Darwin (Edi Gathegi), who “adapts to survive” and Angel (Zoë Kravitz), who can fly due to her dragonfly wings. Each are given a moment to shine (even if some are only shining through visual effects) and both montages, one of Charles and Erik recruiting them and the other their training at the school, are highlights of the film. 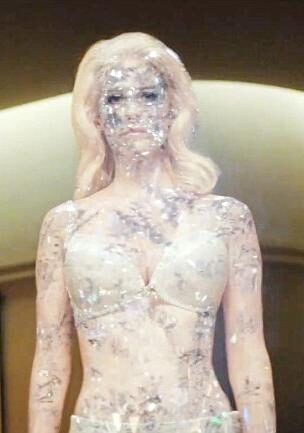 Kevin Bacon pulls duty as Sebastian Shaw and he does it with a smile on his face. He is a formidable opponent for our fledging heroes; his ability to absorb and redistribute energy is both an interesting visually pleasing and deadly. An almost charming villain, who seems to have walked straight out of a Bond film, having a ludicrously amazing home base and even his own henchmen in the forms of Azazel (Jason Flemyng), a teleporting blademaster, and Riptide (Álex González), who can create mini hurricanes, but it is his right hand woman who stands out for perhaps all the wrong reasons. January Jones portrays Emma Frost and although her femme fatale routine is quite enjoyable, you can’t help but feel some of her presence is on the cutting room floor. That doesn’t mean you won’t enjoy her, and her Diamond form is an interesting look, not convincing at first but you warm to it.

On the whole the CGI is generally good with no glaring problems and the use of make-up and prosthetics for Mystique, Azazel and Beast ground them in the world. A world that is really realised on screen and the 1960s setting comes across strong giving the film a sort of nostalgic feeling that only something like Bond would invoke.

The only true negative would be the complete lack of any development for the character of Moira MacTaggert (Rose Byrne) who could have just been a mannequin in the background. Also although the CIA agents bring a few chuckles they don’t really seem to do much else than warn the audience of how dangerous the situation is a few too many times. In fact the same can be said about the multitude of scenes with the American or Soviet governments respectively.

However the action set pieces in First Class do deliver the goods with a memorable aerial chase scene, an interesting, if a little brutal, use of teleportation and Erik unleashing his fury using an anchor.

It isn’t often that a comic book movie comes along and captures what you’d love about the original source material but First Class does that. On the one hand it’s a serious piece of character drama focusing on revenge, discrimination and friendship, but on the other it is a thrilling, blockbuster with a lot of humour and heart.