This is the second part of our brief history of drag by @martinloves , if you missed the first installment you can read it here.

One of the most famous drag queens of the 20th century was Charles Pierce. His impersonations of Bette Davis, Mae West, Joan Collins and other famous stars brought drag to the forefront of theatre and radio. He performed sell out concerts in theatres across America, his whit and humour being the main draw to his work. He described himself as a male actress rather than a drag queen – the ‘original, over-the-hill, valley girl’

The 1960s and 70s saw the development of a number of drag stars. Jim Bailey performed on over seventy television shows, performed a series of concerts with Liza Minnelli, had several runs in Las Vegas and even performed to the Royal Family. 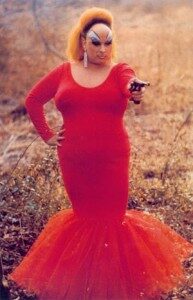 Divine featured in the original John Waters film Hairspray and grew to notoriety after eating a real dog turd in another of Water’s films, Pink Flamingos.

Candy Darling was one of Andy Warhol’s Superstars, and a muse for The Velvet Underground.

The late 1980s and early 1990s saw the rise of the club kid. Particularly in New York we saw a 90s version of Studio 54 emerge with Michael Alig and James St James at the helm. The club kid era saw the rise of model and muse Amanda Lepore and performance artist Leigh Bowery. The club kids were known for going out in elaborate and controversial costumes.

One of these clubkids, who rose to international fame, was RuPaul – arguably the world’s most famous drag queen. With a career that spans several decades, RuPaul is the undisputed queen of drag queens. In the 1990s RuPaul was to drag what Naomi Campbell was to modelling – RuPaul was the world’s first drag superstar. His career has included a string of dance singles, a duet with Elton John, and a presenting slot at The Brits. He also modelled worldwide, including a campaign for MAC, and landed his own TV chat show in 1996.

In 2009 RuPaul created RuPaul’s Drag Race, which was a fusion of America’s Next Top Model and Project Runway. The drag queen with the most Creativity, Uniqueness, Nerve and Talent too the crown. The show was a hit success, with a third series completed. The show is broadcast in the UK on E4.

Drag queens have often featured in films, in a variety of different roles. The most noted of these are Pricilla: Queen of The Desert, Hairspray, The Birdcage, Rocky Horror, and Hedwig and The Angry Inch. These films often showed the beautiful, glamorous side of drag mirrored with the difficult lives of their male counterparts suffered.

The internet allowed more drag queens to find fame. Comedian Liam Sullivan’s character ‘Kelly’ and her song Shoes was an internet sensation with over 40 million views. Jeffree Star rose to fame on MySpace for his cult following from emo kids and his offensive rap lyrics. He recently signed a record deal with Akon’s record label.

they have over 100 years of drag experience. Lily Savage was one of Britain’s most successful queens, most noted for her show Blankety Blank. Previous to that Lily performed for eight years at the Royal Vauxhall Tavern in London. Danny LaRue rose to fame in the West End, performing in seven major shows, and a string of Royal Variety performances. Dame Edna, whilst not British, has received wide success and admiration with British audiences.

These three queens are a small handful of drag queens who have hit the big time in Britain – there hasn’t been a drag star that’s matched their fame in recent times.

There are, however, a number of queens working in and around London who are making a name for themselves, and have been for a number of years. DJ Jodie Harsh’s fame has long outlasted that of her biological namesake. Tasty Tim is another favourite on the gay clubbing scene and Lady Lloyd has recently come off tour with Ke$ha, and is a model for Vivienne Westwood. 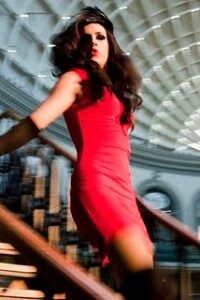 Leeds has a large number of exciting drag artists. To say it’s gay scene is relatively small, it’s number and popularity of drag queens in the city is immense. Anna Glypta was one of the first drag queens to perform and promote drag in the city, helping shape Pride events and much of the community. Another big name in Leeds is Miss Orry – famous for being one of the original Blackpool Funny Girls, and who has appeared on Deal or No Deal and Emmerdale. Other notable Leeds drag queens include Carla Jackson, Anja Bach, Roxxxy, Raven Mandela, Gisele Batrice, Bears Aloud, Cheryl Hole, Daisy DuPount, Pixie Monrue and Maria Millionaire.

Drag Idol Leeds is a massive event held every year, and comes second only to Pride in the Leeds LGBT calendar. Raising money for local HIV/AIDS charities, Drag Idol is a competition where those who have never performed in drag before take to the stage to raise money. Many drag queens in the North utilise Drag Idol as a step into the limelight, or to boost their career.