I heard about Summer Storm (Sommersturm in German) through Queer International when the guys over at Northern Delight recommended it as their Queer German film to watch. I finally got round to it this week and absolutely loved it.

Summer Storm is the coming of age story of aspiring rower Tobi, his unrequited love interest Achim and his female romantic interest Anke. The plot centres around their rowing team leaving rural Bavaria to compete in a national junior competition, unexpectedly competing against all gay rowing team QueerStrokes opens the door for Tobi to explore his homosexuality. 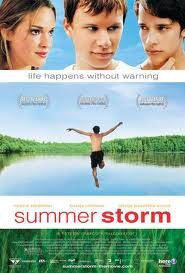 After trying it on with Achim and being rejected Tobi finds himself in the company of QueerStrokes and becomes close to one member in particular. In the following scenes Tobi must decide whether to come out and be honest to Anke, a girl he’d previously been romantically linked to or to hide it from the rest of his team.

Some of the metaphors are heavy-handed to say the least, for example just after Tobi’s first gay experience we see him frantically running through a field of tall grass trying to get back to his camp and as the title would suggest, when the Scheiße hits the fan and Tobi’s actions are revealed, a summer storm literally begins and drives the rowers away from their camp into an abandoned building.

A lot of the scenes are tongue in cheek, especially those with the rowing coach Hansi, a bit of an oaf who falls for the coach of Queer Strokes and whose attempts to flirt with her are usually a bit slapstick. Not to mention a scene in which the most homophobic of the Bavarian rowing team must ask for a vase from the QueerStoke team, the ensuing farce is reminiscent of a Ben Elton sketch and should be taken with a pinch of salt.

Ultimately Summer Storm is a very entertaining film as long as you don’t take it too seriously. It doesn’t tackle any big questions or explore any new ideas but it’s well worth a watch.