Like most years, 2012 is absolutely shaping up to be the year that comic book heroes rule the box office once again. But as The Avengers continue to count the cash and Spider-man and Batman wait in the wings for their next shot, spare a thought for some of the many great characters who may never get the chance to grace the silver screen.

Here are three stars of the panelled page that most definitely have the potential to bring something new to the subgenre of cinema – but only if Hollywood is prepared to take a risk on their unorthodox and very individual styles.

It isn’t just Lobo’s bad-ass good looks and no nonsense attitude to the cosmos that make him an attractive property for the strictly R-rated world of comic book movies – it’s his incredible sense of humour and big-time cult credentials. An alien and intergalactic bounty hunter, this is a guy who tours the galaxy on the back of his customised SpazFrag666spacehog with no regard for anyone but himself and quite probably no valid motorcycle insurance policy. There are reports that Journey 2 director Brad Peyton is attached to a project, but following the lukewarm reaction to Green lantern and Ghost Rider (between which is roughly where Lobo’s concept stands) it seems pretty doubtful. 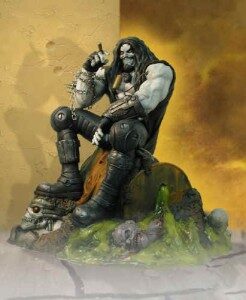 Easily one of the strangest and most existential comic book series to ever be published, Cerebus the Aardvark was created by Dave Sim and ran for 300 issues from 1977 until 2004. Cerebus himself has been everything from a religious leader to a mythical barbarian and often finds himself straddling strange alternate realities. The comics were very comprehensive and often dealt with socio-politically charged issues in their own bizarre and challenging way – so the idea that a studio will trade in the spandex to take on this behemoth of weirdness seems a little bit unlikely.

He’s another bounty hunter with a lethal sense of humour, but unlike Lobo, Death’s Head was a mechanoid beast born of the British Transformers comic series of the 1980s. However, as the character was written to only exist in this particular story arc, he was never owned by the Hasbro toy company – and as such it seems very improbable that he would make an appearance in the Michael Bay-spawned mega-franchise. He did, however, get his own run of titles in the late 80s and has continued to make sporadic Marvel appearances to thus date thanks to his popularity. 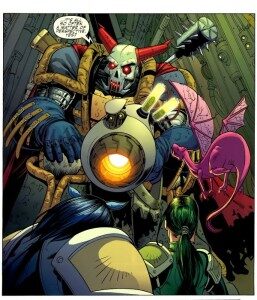 So as the Hollywood machine continues to cherry pick the most commercially viable comic projects for big budget adaptation, it seems there will be many great books and characters that are never given their chance at the big time. It’s sad, but while projects like the above may never get off the ground, the major studios will instead choose to reboot proven characters like Spider-man, Batman and Superman to satisfy that all important bottom line.

What comic book stars do you wish we could see on the big screen?