If you looked in my wardrobe, you might find yourself a little underwhelmed – particularly in the t shirt department. Considering I could be deemed a ‘fashion blogger’, it’s a relatively safe affair. You’ll find a sea of plain t shirts, usually in hues of grey or blue. Purple, if you’re lucky. I’ve always been a bit scared of print, and of motif t shirts – a fear that stemmed from my teenage days of not wanting to look like everyone else. I’d see motifs and prints of oversized text in graffiti fonts or neon city skylines and I was just struck by how meaningless they all were – they didn’t say anything. As an 18 year old Goth, clothes meant so much of my identity, and I couldn’t fathom why anyone would want to wear anything like that. It’s stayed with me as I’ve grown up, too.

It’s my belief that where men’s fashion more generally is concerned, there’s a skeleton in our closet – a fashion faux par we keep insisting on making – the motif. Whether it’s Urban Outfitters or Ark chucking oversized polaroids of scantily clad, blindfolded ladies across their wares, or Hype (and River Island, Primark and the like following suit) producing large, all over screen prints of over exposed sunsets for the Tumblr generation, we can’t get away from the stuff. Once a print trend gets hold in menswear, it just won’t let go. Or worse – it leads to groups of middle aged men thinking it’s ok to wear Keith Lemon on their tops. Shudder.

Whilst some motifs can work (I’m a bit obsessed with dressing like an American footballer at the moment), there’s still a lot of work to do when it comes to what we wear up top. As Elly eloquently puts it – most of the stuff does little to enamour the fairer sex. It seems to come and go in waves, too – remember those awful ‘I’m with stupid’ t shirts? Or even more recently – the ‘Geek’ / ‘Dork’ / ‘Nerd’ lines? Aren’t we better than this? I’m looking at you, Topman – instigator of some amazing fashion for men, but also the one who seem to start these things off. So what’s a boy to do? 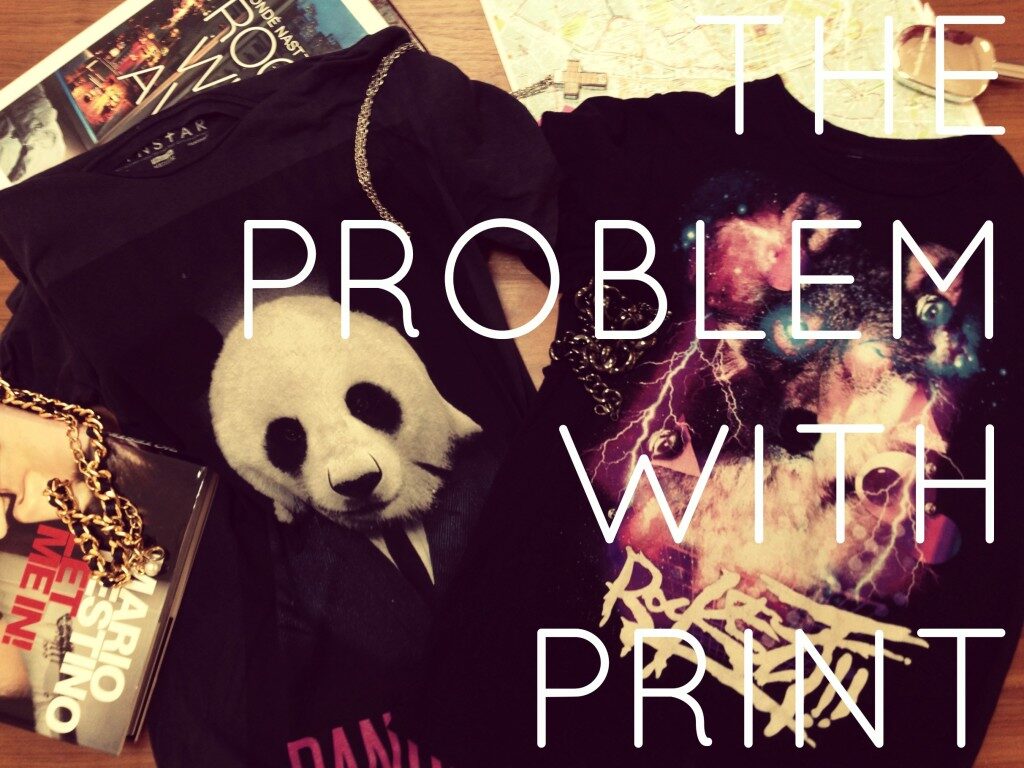 In my own personal quest to not wear print I’m likely to see someone else in, I’ve developed three rules for buying motifs: 1) Go vintage. No, I don’t mean an ironic scout t shirt that shows your midriff, nor one of those D.A.R.E shirts (seriously, how many of those did they produce!?) – I mean scouring the rails for some hidden gems, or doing some really, really specific eBay searches. ‘Space wolf’ allows me to bag a vintage tee which featured a luminous wolf with lazers coming from it’s eyes. Ace. Stay clear of anything Ramones related and you’ll be fine. 2) Go indy. We’ve previously mentioned a number of illustrator led menswear designers here on TQS (just click ‘fashion finds’, to the right) that not only give you the same value and quality you’d expect on the high street, but also guarantee no-one else will be sporting one down the pub. 3) Go designer. The likes of Vivienne Westwood made a name for herself with brash prints (cowboys with their cocks out, namely), and today you can get some ace motifs – and some with some real clout, with Kenzo, James Long and Balenciaga all producing corkers. The latest collection of shows suggest that all over print and motif is going to be sticking around for a bit, so get stocking up and together let’s solve the menswear print problem.

There isn’t going to be a quick fix to the print problem, so long as we keep giving in, so say it with me now: ‘Say no to ironic slogan tees’. Maybe we should have it printed on a t shirt. Check out some print inspiration below and let us know what you think of the print problem.