Ahead of the release of The Avengers Assemble, contributor Dan Cole is taking us through the comic book history of The Avengers. You can read the last installment here but here we’re going through the 2000s: The Disassembled, The New and The Ultimate.

When Busiek left the book Geoff Johns took over writing duty. The future DC Comics top dog, tried to spice up the book by granting the Avengers international authority by the United Nations and added a new Ant-Man and Jack of Hearts, the explosive Avenger. It was a brief stint by Johns and as new writer Chuck Austen joined Marvel was already planning a revamp.

This revamp came at the pen of Brian Michael Bendis. The 2004 storyline Chaos, part of the Avengers Disassembled event, was the start of Bendis epic run on The Avengers franchise which he finally finishes this year. It dealt with The Scarlet Witch going crazy, killing a number of members (including The Vision and Hawkeye) and destroying the mansion. In the aftermath the team disband, but something big was on the horizon.

In January 2005, artist David Finch joined Bendis on a new series entitled New Avengers. This new team had links to the old team as well as some surprise members. After a super villain breakout a this New Avengers team come together. Consisting of Captain America, Iron Man, Spider-Woman and a personal favourite of Bendis’, Luke Cage, former hero for hire with skin as hard as steel. Joining them are new characters Ronin, a mysterious ninja and The Sentry, Marvel’s version of Superman but with mental health problems. To finish the roster Bendis put two of the most recognizable and marketable characters on the book: Wolverine and Spider-Man. The team was an instant hit and has ushered in a new golden age for the franchise.

The franchise would grow and add two books alongside New Avengers. Spinning out of Marvel Civil War (2006), Mighty Avengers and Avengers: The Initiative (both 2007) offered different perspectives to the Avengers. Civil War (image below) saw Captain America and Iron Man come to blows and after the event New Avengers concentrated on the heroes on Captain America’s side, whilst Mighty Avengers concentrated on Iron Man’s side. Mighty was in keeping with the old style of Avengers comics as the team (Lead by Ms. Marvel and including Black Widow, Wonder Man, Ares, The Sentry and Iron Man) dealt with the “big” threats. Whereas New Avengers dealt with more street level crime and consisted of Luke Cage, Spider-Man, Wolverine, Dr. Strange, Iron Fist and Spider-Woman. Avengers: The Initiative dealt with the training of new avengers candidates under the watchful eye of Hank Pym (now fine after his breakdown). 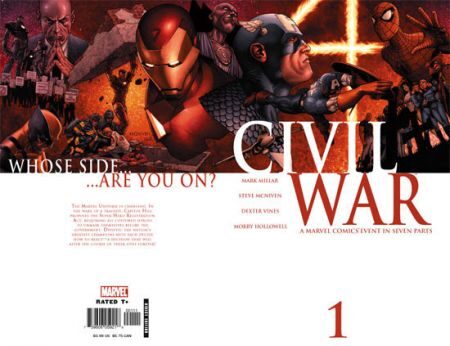 This decade saw the rise of event comics. There was Secret Invasion and Dark Reign, which ushered in a dark time for our heroes. Captain America and Wasp died, but Hawkeye was resurrected in this decade (and Captain America was as well thanks to a high profile film). Norman Osborn, the Spider-man villain Green Goblin, managed to get into power and created his own Dark Avengers, twisted versions of the recent team. The Avengers had become outlaws under Osborn’s reign, but all that was about to change.

But, before we get to 2010 something else happened in the 2000s; the birth of the Ultimate Marvel Universe. Marvel’s Ultimate line was conceived as a gateway comic for new readers, people who have seen the films for example. They are free of the decades of continuity and were re-workings of the classic characters.

Given 21st century sensibilities, Spider-Man and the X-Men were the first to be “Ultimized” in 2000. Tweaks where made, some big some small, The X-Men wore more militaristic uniforms and Spider-Man was no longer a photographer for the Daily Bugle but worked on their website instead.

In 2002 The Ultimates were created, by writer Mark Millar and artist Bryan Hitch. The book had a more cinematic style to it, which the creators had used to great effect on The Authority. No longer a happy group of heroes banding together to fight evil, they where created by S.H.I.E.L.D to deal with any type of threat. Wearing costumes that are more practical and darker than the original continuities heroes, These Ultimates meant business. Hitch’s redesigns perfectly reflect the realism that the Ultimate Universe was all about, his redesigned Nick Fury even looked like Samuel L Jackson. It is the Ultimates, which has the biggest influence on the upcoming Avengers film and even though the series has had a rough patch in the past it has been revamped and is still going strong even now 10 years after it’s release.