There are a lot of questions when it comes to fashion. One of the big ones is how some things which were so horribly out of fashion are now all of a sudden back in style? If you are one of those people who are slow to find out about the goings-on in fashion, this could mean that you are going to toss out the flares you haven’t worn in 10 years the week they come back into style. Does the fashion cycle mean that everything will eventually be back to style?

The fashion cycle is the traditional bell curve. What this means is that just as something hits its peak it is already beginning its decline. This is about the point when an article of clothing goes mainstream. In a TQS first, here’s a graph illustrating the fashion cycle: 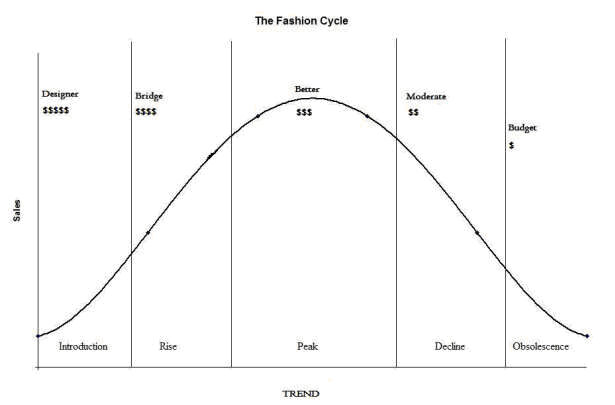 Part of fashion and being trendy is about being ahead of the curve – to do that, you have to have the confidence to be a fashion risk-taker. Not talking about going Lady Gaga here and you wearing a slab of beef to your friend’s wedding just having the guts to wear something that is more out there than usual.

The reason then why something comes back into fashion is due to a number of reasons. One of them is nostalgia. There is something comforting about wearing something that used to be popular, especially if you wore that item in your youth. It should be noted that a mother raiding her daughter’s closet so she can wear her A&F or Patterson Kincaid clothes isn’t cool. It’s even less cool with her dad does it.

Then there’s fashion designers, just like Marty McFly, going back to the future and looking to the past for inspiration. Fashion designers are artists and they like to incorporate styles that used to be ‘in’. It can be paying homage, but if the item in question hasn’t been around for a while, reclaiming it is akin to it being brand new.

However, something that has been out of style for a long time doesn’t have to be back in style for someone to wear it. That person is making a statement by being ironic. So if you are a guy feel free to wear an Asian-collared shirt or a flannel shirt with impunity. By it being so un-cool, you are making yourself cool. Having said that leisure-suits, parachute pants and neon have most likely had their day and won’t be brought back – unless society is taken over by people who have next to no taste.  Like anything with fashion, you need to have the style to pull it off.

Kelly Davis likes to write about fashion. In her world, people would be arrested for fashion crimes.