There comes a time when a man creates something so brilliant that he has no hope of ever surpassing it. It’s that point where nothing else that he can make will escape the shadow of that single achievement, and the judgement that comes with it. It is for this reason that making The Dark Knight was the worst mistake Christopher Nolan ever made. He made something as close to perfect as cinema could get; of course the sequel wasn’t going to be as good. The good news, though, is that The Dark Knight Rises is still an excellent film.

But just how excellent? There are certain aspects that a more carefully handled, and more intricately woven, than its critically-acclaimed predecessor. Bruce Wayne, for example, is at his most relatable, and it’s nice to see that Nolan has focused his attention back towards the personal development of our masked, voice-like-gravel-in-a-blender protagonist. After eight long years of abandoning his alternate persona, Bruce is broken, both physically and spiritually; Nolan doesn’t let us forget about Rachel’s death, instead incarnating her absence through Bruce’s deterioration, and a surprisingly emotional scene between Alfred and Bruce. Michael Caine returns for the role of our favourite cockney butler for the last time, and, I have to say, he is at his best in this film. Anne Hathaway brings possibly the best Selina Kyle (or Catwoman, though she is never referred to with this classic pseudonym in the film) screen interpretation to date, despite the wealth of blogger-hatched scepticism that circulated the web that a nasty cold the moment she was announced as the famed feline seductress. She’s clever, and she has some brilliantly choreographed fight sequences that are arguably better than Batman’s. 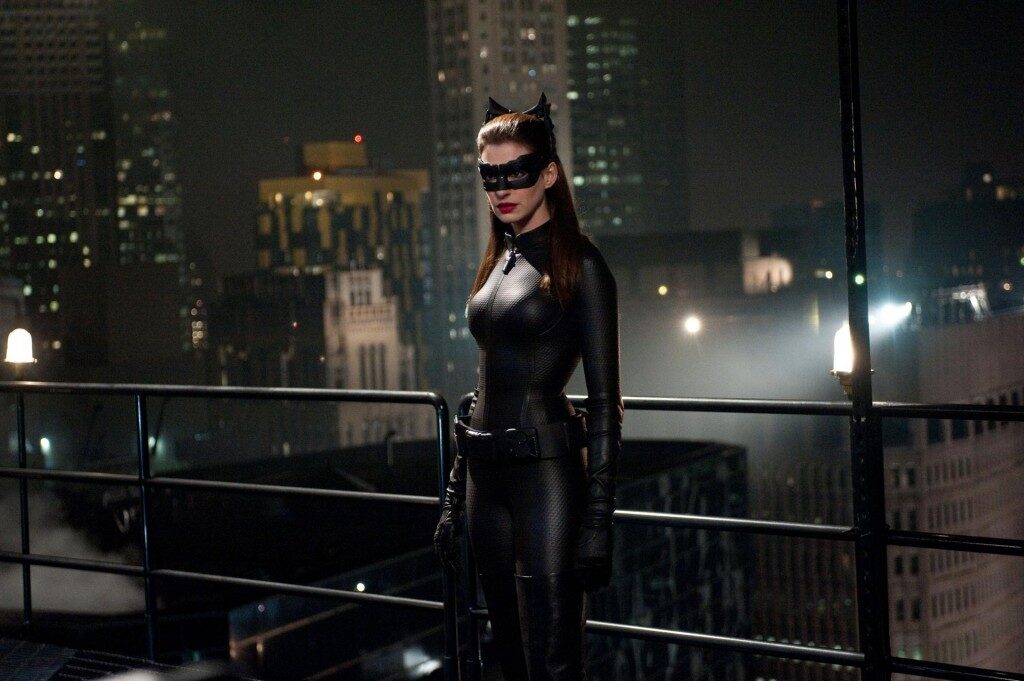 For the most part, the story is riveting, the set pieces breathtaking (literally, I held my breath for one of the most iconic moments in the film) and, to my surprise, a plot twist or two that I just didn’t see coming. So what on earth could possibly be wrong with it?

That’s a tough one, and I’ll try to explain as best I can. Though all of the protagonists are the most engaging that they have been in the series – even Christian Bale manages to show his vulnerable side – the villains aren’t quite as memorable, or even as significant to the plot.

Bane, the head honcho, is certainly very physically imposing, with Tom Hardy portraying the comic-book icon in such a way that, for the first time, we genuinely worry for Batman’s safety. His action sequences are brilliant, as he deals hand-to-hand with each opponent (usually one of his own cronies that has let him down) with fierce brutality, the kind that makes you cross your legs at the onscreen pain. He has some memorable lines too, delivered with placid evilness, which differs from the Joker’s manic enthusiasm, but is no less threatening.

My main problem with Bane, however, is that his message is at best uninteresting. Whereas Heath Ledger’s classic performance communicated some values that made us question the city, even the world order (think back to the Joker’s ‘When everything is part of the plan’ speech in Harvey Dent’s hospital room in The Dark Knight, and you’ll know what I mean), Bane just seems to have an anti-capitalist agenda, for a reason that is never properly explained. He proclaims himself a liberator, a symbol of freedom for Gotham’s citizens,

For the record, I actually liked Bane. Not as much as the Joker, but I certainly felt that I got my money’s worth from Hardy’s performance, and I respected Nolan’s choice to pursue a character that was very different to the clown. The issue, however, is that he never says anything that makes you think ‘maybe he has a point’; he comes across as a ‘for the sake of it’ villain.

On the whole, though, the best thing about this film is that Nolan has taken the reins with a firm grip, and brings us a film not about Batman, like Begins, or his rival, like TDK, but about Gotham itself. There is a wealth of new characters with a lot of substance, including John Blake, the uniformed optimist played by the likeable Joseph Gordon-Levitt. Blake comes across on-screen as one of the only people left with hope, and motivation. He stands tall with his predecessor Harvey Dent as ‘Gotham’s true hero’, risking his life again and again for what he believes, even when Batman does not.

Despite my quips with Bane and his motive, and parts of the story (you should be thankful I have not revealed anything), it is undeniable that The Dark Knight Rises is a great film. If it had been released in The Dark Knight’s place four years ago, perhaps its praises would ring aloud in the comic book kingdom just as significantly as Heath Ledger’s epitaph once did. But that’s the problem; it wasn’t, and, to a great deal of cinemagoers, it just wasn’t as good as The Dark Knight. It’s a pity that such a film must live in the shadow of its ancestor, a shadow that makes the brightness of this film that much dimmer, the stand-out colours that much duller. Still, it’s a damn fine job by Nolan. I will certainly be watching it again.

Jonathan Taylor is an avid film enthusiast, and takes no better pleasure than sitting back and watching a great film on the big screen. He is currently writing for a number of online magazines, while preparing for his second year at University.