Taking on this 500 page classic tale and distilling the long and involved plot into a West End production seems like an almost impossible challenge; capturing the essence of a story with a backdrop set across years, miles and classes with the restrictions of a stage, timings and budget.

However Graham McLaren altogether exceeds in telling this tell in truly gripping, Dickensian manner. Although the play only loosely follows the books narrative, it successfully tells the story in what is a visual masterstroke.

The true triumph with this production lies in its staging; the set is impressively gloomy, the costumes are fantastical and sinister and the acting is gaudy. Although the smell momentarily transformed me back to a Stoke-on-Trent nappy night in 2002, dry ice billowing into the audience only added to the ambience; resulting in a visceral and compelling production that is both eerie and entertaining.

I initially thought that there might be a danger of Great Expectations being dull or dry, though it was a far cry from either, I was transfixed throughout.

A key ambition of this play seemed to be that it was visually very appealing, that it was intense, consuming and above all, a little bit scary and very very…arty.

Sometimes however this striving for virtuosity was verging on pretentious. I felt this during only one short scene, in which horribly masked actors depicted being hanged through swaying side to side (queue more dry ice) whilst Pip (played by Paul Nivison) delivered an emotive monologue. 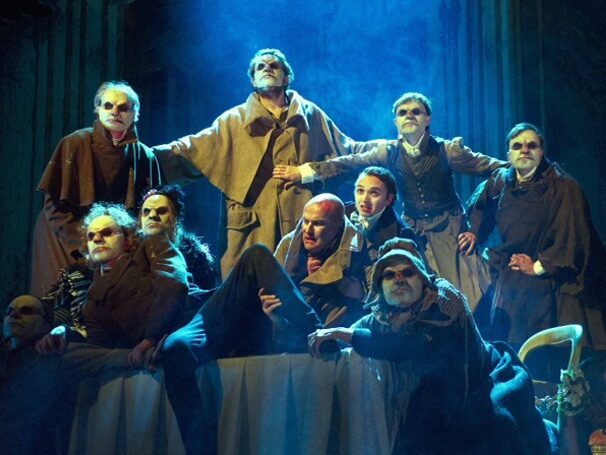 However the audience were audibly impressed when Miss Haversham met her fate, in what was a blaze of real fire on stage.

Overall Great Expectations is excellently executed, with a wonderful cast and breath-taking set.

You can purchase tickets for Great Expections from Shows in London and is running throughout February.