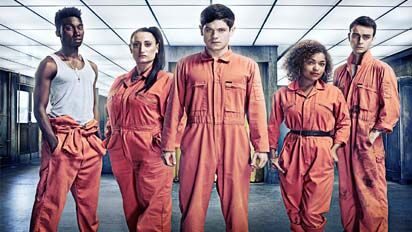 One of E4’s best original dramas returned to our TV screens on Sunday night and fans were eager to find out whether Nathan’s departure would be the death of the series or breathe new life into it. Spoilers ahead!

At the end of the last series we were left with the ASBO 5 about to get some new powers. After they sold their original ones to a dealer who could transfer powers, they realised that life was just as hard without them so returned to the dealer to buy some more. The gang may have gained new powers but they lost one member. Nathan (Robert Sheehan), arguable the main character and definitely the most charismatic, left for Las Vegas with his baby and girlfriend to try and take some casinos down. When I heard he wasn’t returning I have to admit I thought that would be the end. Whether the writers meant it or not, he was the centre of the show and without him you had to think, “Can Misfits survive?” After watching the first episode, I’m glad to say I think it’s going to be fine.

E4 gave Nathan a goodbye in the webisode “Vegas Baby!” (how Sheehan wasn’t locked down to a longer contract I’ll never know) and there was only one mention of him in the new episode. They obviously would like to move on quickly and cleanly. This was definitely the new guy’s episode. Say hello to Rudy; foul mouthed, quick talking and cocky when we meet him, he is also doing community service. We’re also introduced to his power straight away; he can spilt himself in two. The other Rudy is a shy, sensitive type, who doesn’t mind spilling all of Rudy’s darkest and most personal secrets to everybody.

But what about the others? Well, Simon is still trying to be ‘the guy in the mask’ and his power seems to be that he is able to see into the future. Curtis can change into a girl whenever he wants. Alisha can put herself in other people’s shoes; she knows what people are doing and where. But my favourite power has to be Kelly’s. She’s a rocket scientist. And rather unsurprisingly, no one believes a girl like her actually designs rockets. As she says what’s the point in being a rocket scientist when no one believes her? A truly original super power and one I can’t wait to see how the writers make useful. I’m sure they will delve into each of their powers more as the series progresses.

The story line of the episode is mainly an introduction to Rudy and how to get the gang back in those orange jumpsuits. There is a crazy probationer who can freeze time and tries to get Rudy framed for murder. But by the end of the episode she’s buried and Rudy is fully fledged member of the gang. But how do the others end up back doing community service? They get caught in a car Rudy stole. Busted.

Misfits is one of the best dramas of recent years. Yes it’s crude, rude and has enough creative swearing to rival The Inbetweeners but it’s one superhero show you don’t want to miss. All in all it’s a great start to the new series. Rudy is basically Nathan part 2, but he’s so funny and somehow likeable you don’t mind. As Rudy says “Do you really think we’re going to be spending the next 7 weeks just ambling about picking up litter?” Of course we don’t!

Kelly is fast becoming my favourite character and her exchange with Rudy was a particular highlight:

Rudy: “What you doing?” Kelly: “Designing a new propulsion system.” Rudy:’ Why?”

“Is this brunch? Because it just feels like I’m eating a bacon sandwich.”