In anticipation of the much talked about release of The Hunger Games early next year, a film about the brutal annual fight to the death between children, we thought we’d take a look at some of cinema’s (and other fiction’s) most ultra-violent sports as well as give a survival rating for each one, from Tron’s Disc Wars to the cruelty of Pokemon, fancy your chances?

Chess? Violent? No way! Well in the world of Harry Potter chess is quite the brutal sport. Children of all ages can now watch the pieces come magically alive and batter each others brains out with no risk to their lives. But change that to life size the rules change, granted this was a one off trial on Harry, Ron and Hermione’s quest to find the stone but it is significantly aggressive. In life size wizard’s chess you can ride the horse or replace a piece and are therefore susceptible to injury. However Ron does survive being smashed off his horse and therefore puts into question whether wizard’s chess should be on this list, but due to the fact your attacked by giant stone chess piece it could be quite deadly.

Survival Rating: 100% If three children can walk away from it, then one can assume most people will survive. 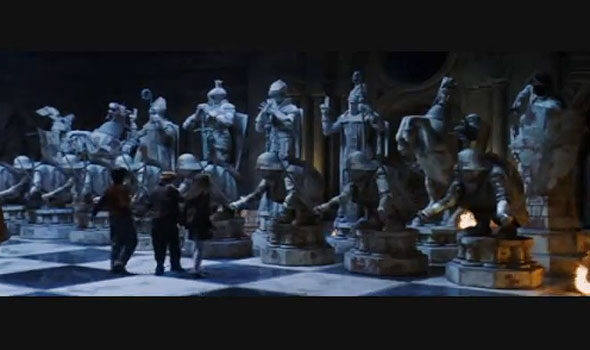 Essentially the whole point of podracing is to be strapped into an open topped cockpit whilst being dragged along by two or more massive jet engines. The Star Wars equivalent of chariot racing is a high-speed race over treacherous terrain whilst dodging potential attacks from other racers and even angry Sand People. The cockpit is about as safe as a paper house and the fact that most of them have been built from scratch on some backwater desert world does not inspire confidence. Also the fact that you need the Force (or to be an angry alien) to traverse the course doesn’t bode well for the pilots. It all adds up to a very high octane but ultimately deadly sport.

Survival Rate: 70% If you can handle the speed and have played a lot of computer games you may have an advantage, other than that you will need Jedi reflexes. 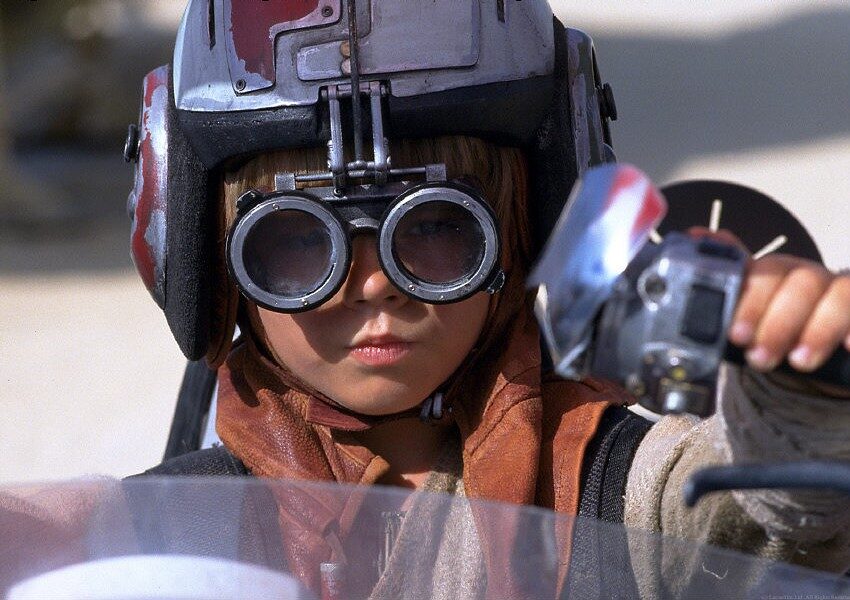 So you enter into a Roller Derby only to find out that the people in charge are giving you body armour with giant spikes on it. Rollerball is a future sport which has violence at its heart. Essentially there is an offensive team who have a steel ball and must score points by throwing said ball into a magnetic goal and then there is the defensive team who, you guessed it, have to stop them by any means necessary. Add to the facts that not only are you on rollerblades flying around the ring at high speeds there is also the inclusion of motorbikes, which add to the carnage. This isn’t a sport for the faint of heart.

Survival Rating: 60% Concentrating on skating, dodging motorbikes and other players attacks combine to create a deadly arena for most people. 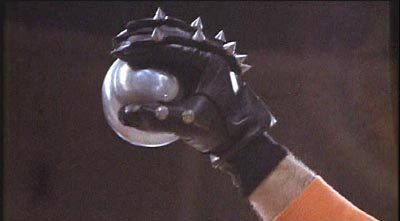 Coming from a film with the title Death Race is isn’t too hard to understand why this makes the list. It’s a coast-to-coast race in America that spans three days and points are scored not only for speed but for the number of innocent bystanders you can run over (and preferably kill). Each car is made out to look as violent and angry as they can be, some resemble monsters and lions for example, and all have their own weapons. With the driver and a navigator it is a bit like rally car racing, but with a lot more death. Add to this the local resistance who are adamant to blow you up then it could be a little dangerous

Survival Rating: 50% To be fair if you are competent driver and you can be a little aggressive then your probably going to be ok, but factor in the weapons and the resistance who want your blood and your chances significantly drop. Also if you are a pedestrian who lives in any of the places the cars drive through you probably have a 20% survival rate if you don’t stay indoors. 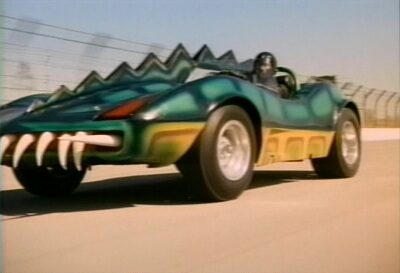 A place ruled by Tina Turner with that hairstyle is scary enough but add to the fact that the Thunderdome is a weird giant birdcage full of weapons and it’s enough to wet anyone’s pants. Basically there is one rule “two men enter, one man leaves”, so what we have is a gladiatorial fight to the death. But as it’s set in the crazy world of Mad Max there are a few differences, namely both combatants are attached to bungee cords and the weapons are dangling around the dome. So you have to bounce around the place finding the best weapon and dodge you opponent. Another deadly edition are the spikes that surround the arena so that you can grab hold of the other player and pull on their bungee so they are flung into them. All and all a fun looking but violent sport.

Survival Rating: 40% One mistake and you’re done. Also with all the bouncing you can easily become disorientated. 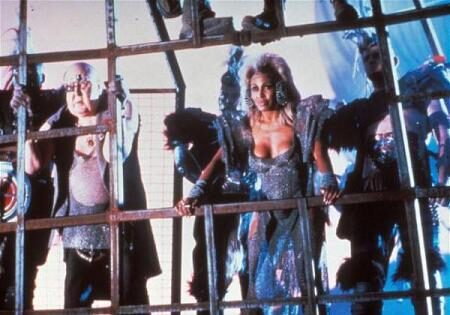 In the futre reality TV will let us see convicts attempt to win their freedom. However they must do this by surviving The Running Man. Basically you have your ‘Runners’ and then you have the ‘Stalkers’. The Runners, the convicts, must escape the Stalkers to get their freedom. But there is a bit of a twist, the Runners are unarmed whilst the Stalkers can have any weapon they desire, from chainsaws to flame throwers and even a special suit, which can fire electricity. So the odds are not in the Runner’s favour and more often than not none of them make it. It’s an entertaining form of capitol punishment and will probably be a highlight in Channel 5’s programming in the near future.

Survival Rating: 15% To be honest unless your Arnie I don’t think many will survive this. But some people might be able to outwit the Stalkers. 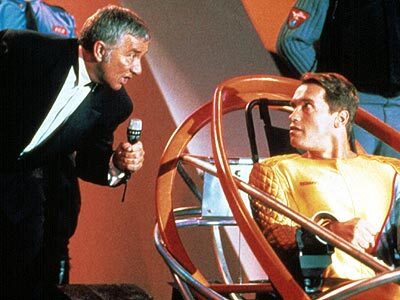 Well the digital word of The Grid is all about the blood sports, even if no real blood is spilled. There are several games and all the outcomes are you either win or die. The two most memorable games are Disc Wars and Lightcycles. In Disc Wars two players throw a deadly Frisbee at each other. They can also use the walls around them to bounce the death Frisbees off  of and this all adds to a shiny display of death. But it is the Lightcycles, essentially a giant game of snake (the one on your first Nokia) and it is done at such a speed that to the player it could just seem like a blur of colour. Unless you’re evil or Jeff Bridges (or his fictional son) then there isn’t really much you can do to win Lightcycles.

Survival Rating : 15% Basically you need to have better reflexes than a computer, so not a lot of people will survive this one.

In a world where the hunting and enslavement of cute little creatures is a pastime you can imagine why this sport made the list. Essentially young children are encouraged to “catch them all” as they traverse the world and look for new Pokemon. What happens when said children get there hands on one of the unsuspecting animals? Well they are imprisoned in a ball and trained to fight for the rest of their lives, unless of course the Pokemon Trainer finds a better one and then these poor creatures are put in storage like cans of beans. Each creature unleashes powerful attacks, mainly based on the fundamental elements (earth, fire, water, etc), on another creature as the trainers stand around ordering them to attack. This barbaric sport, which has invaded pop culture with no one batting an eyelid,  is made all the worst when they only way people make any real money is through these battles and therefore no Pokemon is safe. On top of all this the trainers force these creatures to fight until they “pass out” (obviously they die and the technology is so advanced that they ca bring them back from the dead). This all adds up to possibly the most barbaric sport on the list.

Survival Rating: 100% As it is the poor Pokemon who gets all the beatings. 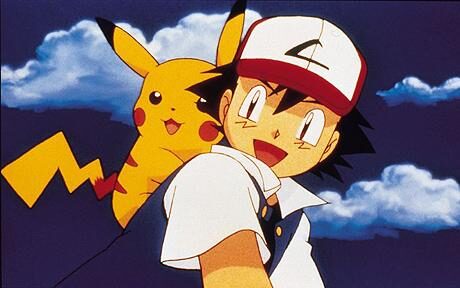 So there is a tournament where the prize is Earth itself. The stakes are high and the violence even higher. Thrown in the tournament with the heroes of Earth are a mixture of undead ninjas, monsters with swords coming out of their arms and even Gods. Each match ends in death with each combatant displaying a unique finishing move designed to kill your enemy in the most colourful manner possilbe. So with the fact that most of the fighters have magic powers it would seem like any normal fighter has literally no chance in winning.

Survival Rating: 5% if you normal like most of use. Magic powers will improve your chances.

Like the Thunderdome as some many enter but only one can leave. In fact 24 contestants, 12 boys and 12 girls from 12 districts, are pitted against each other in a contest to the death. The arena could be any kind of terrain, in the book it’s a woodland area, and this throws up enough problems before the killing even starts. These environmental problems are enhanced by the fact that all the survival gear and weapons are concentrated in one area, the area where all the contestants start. This leads to panic and confusion as the starting area, the cornucopia, as it becomes a bloodbath. Also some of the contestants are know as ‘careers’ and they have been training in the more opulent districts which give them the a major advantage. Add to this the fact that the career’s usually team up and the other districts don’t stand a chance (unless you’re a main character in the book). It is a test of mental and physical prowess as each of the children aim to kill each other.

Survival Rating: 5% for a person from the poor districts or 20% if you come from the wealthy ones. Either way it’s brutal. 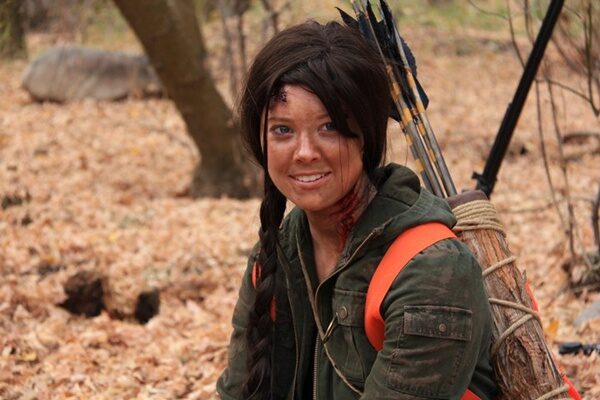