Three more comedians have joined the stellar line-up at this year’s Laugh or the Polar Bear Gets It (a Friends of the Earth benefit gig) at the Hammersmith Apollo 22nd November.

Set to be another year of world-saving japery, the line-up now includes: Josh Widdicombe- star of The Last Leg (C4) and Live at the Apollo (BBC One), Edinburgh Comedy Award nominee Tony Law and Danny Bhoy, as featured on The Late Show with David Letterman & Live at the Apollo (BBC One) who join Stewart Lee, Ed Byrne, Dan Antopolski and Francesca Martinez, with more exciting names to be released. 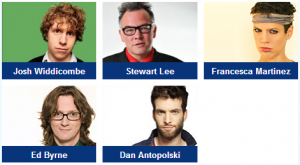 In its third year, Laugh or the Polar Bear Gets It will not only provide you with a whale of a time, but will go a long way in supporting Friends of the Earth’s mission to promote a positive relationship between people and the environment.

Tim Minchin said of last year’s show: “This show’s titular threat is deadly serious. If you don’t come and laugh, we have an actual metaphorical polar bear and it is seriously going to get ‘it’. Luckily, we are not worried, because (a) the line-up is excellent, and (b) we don’t know what it’s a metaphor for.”