Charlie Brooker is back with 3 more episodes of Black Mirror next month (Be Right Back, The Waldo Moment & White Bear) all of which explore the darker side of modern world’s relationship with technology. We were lucky enough to attend a preview screening of the first episode, Be Right Back, read on for our spoiler-free review.

Be Right Back follows Martha (Hayley Atwell, below) and Ash (Domhnall Gleeson), a young couple who move to a remote cottage. However, Martha doesn’t always get the peach and quiet she wants since Ash is a heavy social media user, often “stolen away” by buzzes and rings of his mobile phone. Martha’s life is turned upside down when Ash is killed in a road accident (we promise that isn’t a spoiler, it happens pretty quickly) and to cope with her grief she turns to a piece of software which after reading Ash’s “social footprint”, replicates his personality and offers Martha instant comfort. 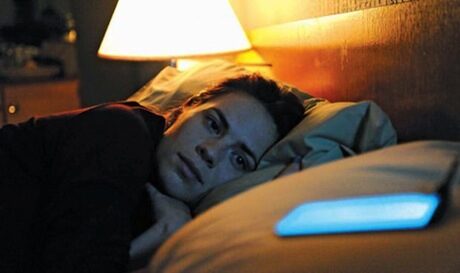 As Martha downward spirals, the software helpfully informs her he of upgrades, add-ons and new versions. After a shock discovery, Martha finds herself in a darkly original situation filled with moral dilemma.

Be Right Back is set in the “day after tomorrow” where the razor thin phones and swanky tech wouldn’t look out of place in an Apple store, adding a sense of credibility to the tale. This software really isn’t a giant leap from current society, companies already exists that offer you control over your social accounts when you die so it probably isn’t long before some evil genius brings it to reality. Would you use it? We can’t for sure say we wouldn’t.

Be Right Back is the strongest episode of Black Mirror so far. A tale so believable, emotionally thrilling and free of some of the gimmicky nods to current technology which damaged the first three episode, we can’t wait the remaining two episodes.

Watch the promo trailer for series 2 of Black Mirror: