What with the re-release of Jurassic Park at the cinemas, it seems the perfect time to share with you my Top 10 Steven Spielberg films. It goes without saying; Steven Spielberg is one of the most influential directors working today. I know there are some classics missing from this list, but when you’ve got a filmography as impressive as his, some films are going to fall by the wayside I’m afraid. Maybe I can convince you, and don’t worry; I’ve not put Hook in there (although secretly I love it).

I was struggling with the last film on the list. There are probably “better” films than this but I think The Lost World is a pretty good summer blockbuster. Four years after the original weekend from hell, John Hammond tells Dr Ian Malcolm about Site B; another island which the dinosaurs were bred on before being transported to Jurassic Park. A research team is sent there, but at the same time, InGen (now run by Hammond’s ambitious nephew) is trying to start Jurassic Park up again, by taking the dinosaurs off the island. Of course everything goes wrong. It has some great set pieces, extra dinosaurs and even more Malcolm. My friends and me always had a joke about how would they get them back on to the island; what would Hammond do? Realise he forgot his wallet? So the fact there was another “secret” island with dinosaurs that we hadn’t seen in the original JP, I thought it was a great idea. It has a stellar cast (with Vince Vaughn in one of his early roles) and I love the ending, although I know some people don’t buy it. Spielberg looks comfortable directing the dinosaurs again and with it he had a monster hit. 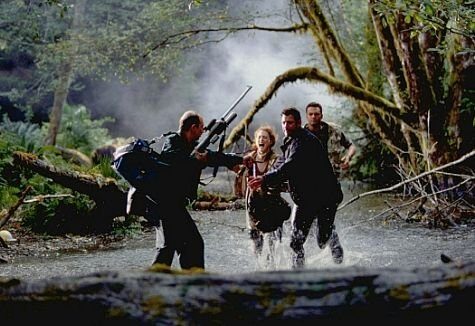 This film seems to get forgotten about as a Spielberg movie, but it’s brilliant. Leonardo DiCaprio stars as Frank Abagnale who, through cheque fraud, cons millions of dollars by acting as a pilot. Tom Hanks is the FBI agent who has to catch him. It’s based on a true story and is all the more amazing for it. As with many of Spielberg films, it deals with a broken family (Frank’s parents are divorced) and a relationship (turning into a friendship) at its centre. Frank isn’t painted as an evil crook, he just seems terribly lonely. He wants to find his place in society and forget about his past troubles. It’s oh so stylish, with the opening credits being a particular highlight. Another great cast and amazing performances, it all adds up to a stylish true story that’s a great afternoon flick. 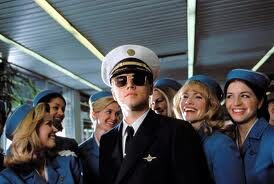 Another sci-fi film from Spielberg with a great tag line; “Everybody Runs.” Spielberg seems to get the best out of Tom Cruise; War Of The Worlds just missed out on the top 10 by the way. Based on a Philip K. Dick short story, it’s set in the not-too-distant future where murders are non-existent. John Anderton (Cruise) is in charge of the Pre-Crime unit where 3 psychics (pre-cogs) can tell when and where a murder will take place. Everything works great until Anderson’s name comes from the pre-cogs; thinking he will be arrested straight away, he decides to run and try to clear his name. Minority Report maybe a science-fiction film on the surface but it is a well-constructed thriller and great murder mystery. The conclusion is much debated, with the “happy ending” not sitting well with everyone. Because of the dark tone of the overall film, I think the ending doesn’t quite sit right. However, what’s gone on before makes this well worth watching.

I’m not the biggest fan of war films and it’s only recently that I’ve managed to watch this. I was not disappointed. People always talk about the beginning of the film, and with good reason. While the rest of the film is great, it’s definitely the beginning that shows us that war is indeed hell. It is jaw dropping. Spielberg knows how to grab his audience, that’s for sure. The story is set in World War II as we follow Captain John H. Milner (Tom Hanks) as he and 7 other soldiers search for the last surviving Ryan brother; the 3 other brothers have been killed within days of each other and they have been ordered to find Private Ryan and take him home. Spielberg received his second Best Director Oscar for this, and well deserved it is too. 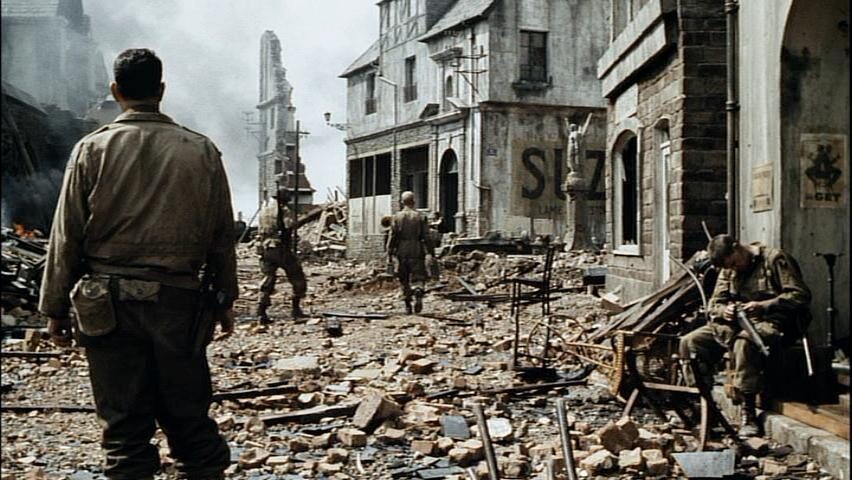 Originally a made-for-TV movie, executives were so impressed with it, it got released at the cinema. The rest as they say is history. It’s such a simple premise; a motorist gets stalked by a lorry with an unseen driver on the back roads of America. Spielberg is something of an expert at creating a monster out of something you cannot see; the open road in his mirrors is just as scary as the actual truck. I find this film terrifying, it’s truly one of those films where you think, “What would I do in this situation? What COULD I do?” Simple, subtle, terrifying. 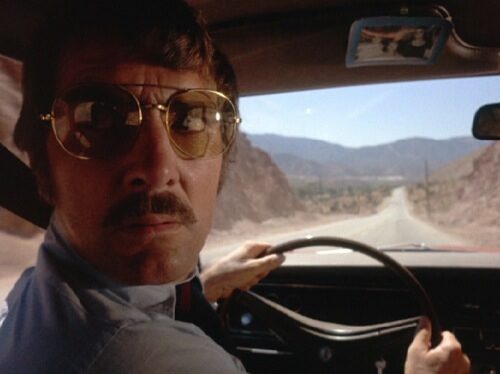 I enjoy all the Indiana Jones films; even a recent re-watch of the fourth film confirmed what I originally thought; it was fun and possibly better than the Temple of Doom. I was debating between this on The Last Crusade but I went for this as it’s the originally, and the one I have watched most. It follows archaeologist (and part time teacher) Indiana Jones while searching for the mystical Ark of the Covenant and trying to reach it before the Nazi’s do. It is pure escapism and a great family film for a rainy Sunday afternoon. The melting face still gives me nightmares though. 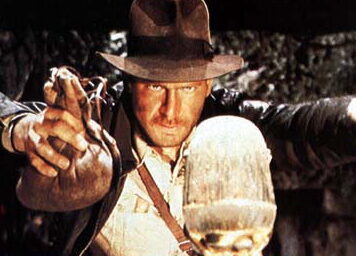 There was a time whenever someone mentioned E.T I would think of those B.T adverts. Thank goodness those times are over and what I am left with is another near perfect family film. It again focus’ on a troubled family, an obvious Spielberg trait that runs through much of his work. Elliott, a little boy who himself is lost, finds an alien far away from his home. He decides to befriend him and they start a friendship that they both need. The part when the scientists are all over the house still scares me and I don’t know anyone who wouldn’t have shed a tear at the end. Full of iconic moments and a beautiful score (from long time collaborator, John Williams), it truly is a classic. 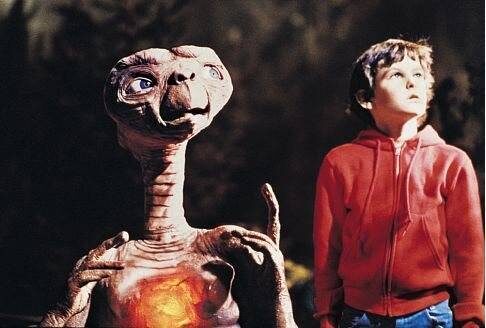 Schindler’s List gave Spielberg his first Best Director Oscar and there would be many people who would claim this to be his best work. It’s an opinion you can’t argue with too much; I could call it his best drama, no question, but not quite his best film. Based on the book Schindler’s Ark, the film follows Oskar Schindler, a member of the Nazi Party and a businessman who tries to save as many Jews as possible in World War II by employing them in his factories. One of the hardest films I’ve ever had to sit through and one I may never watch again, but it is truly one the greatest films ever made. The fact that this and Jurassic Park got released in the same year shows what a versatile director Spielberg is. It’s not a film to watch lightly, but watch it you must. 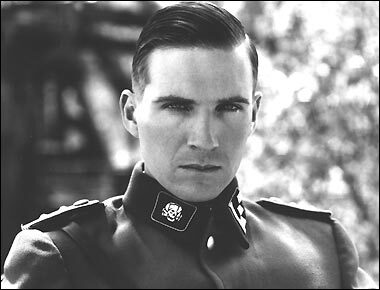 The original summer blockbuster in my eyes, it’s a horror and thriller with a killer shark. Everyone knows the story; shark terrorises a small beach town around the 4th July celebrations, people get eaten. Another great opening (something he parodies in 1941. The least said about that film the better), it sets the movie up perfectly. It’s a simple premise (a Spielberg speciality) and an iconic score (thanks again to John Williams) that help crank the tension up to 11. It taps into most people’s fears of the ocean and water; what’s really under the surface? Even the sub-par sequels can’t diminish what we have here. It may not have as good a tag line as Jaws 2, but of course we are still scared to go back into the water. 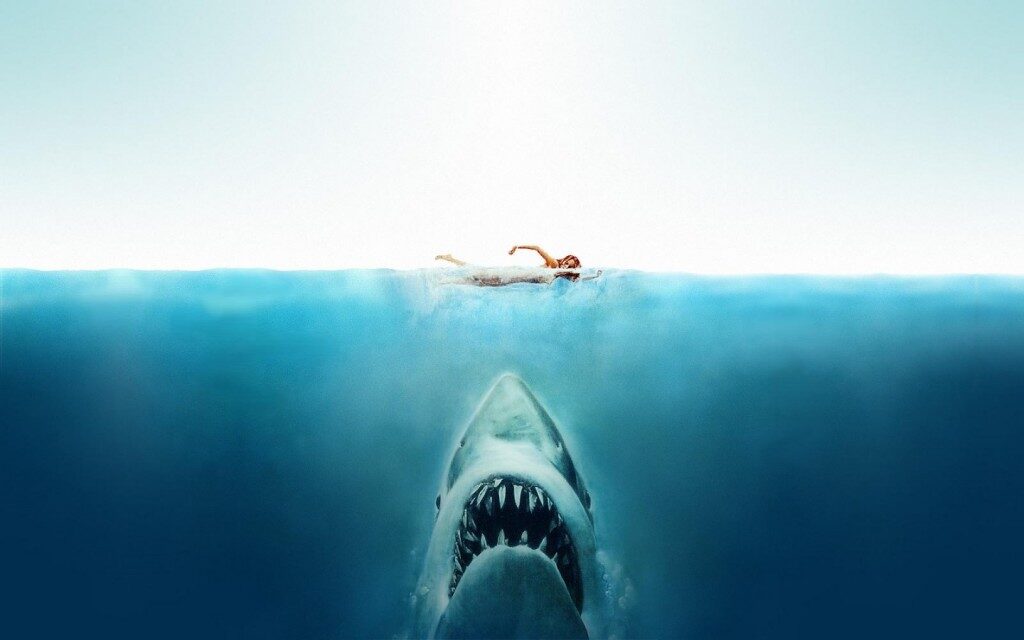 Truly the greatest blockbuster ever made, 18 years on and it’s not aged a bit. The CGI is flawless and thanks mostly to Stan Winston the dinosaurs look real. In fact, the only thing that dates this film is the interactive CD-ROM in the cars. One of the highest grossing films of all time, I believe it’s Spielberg’s most perfect film. Spielberg does like to adapt books as this is based on Michael Crichton’s bestseller. While on a tour of a new theme park, it all goes horribly wrong when the systems start to fail and the dinosaurs run amok. It’s not until roughly an hour in that stuff really hits the fan. The tyrannosaurs-rex paddock attack is yet another example of Spielberg’s ability to create tension, and have you gripping your seat. The glass of water on the dashboard is such a little idea, but it’s just perfect for the scene and has permuated wider pop culture forever. The tension! It’s possibly the greatest action set piece ever made. Then we have the velociraptors in the kitchen, a scene that STILL gets me every time. When Tim runs into the fridge, my heart skips; I think maybe he won’t make it this time. Also, everybody can agree that Spielberg was right by bringing the t-rex back for one last terrifying roar. Even though I’m still not sure how he got in there. An instantly recognisable logo, another amazing score and dinosaurs. It may have been an adventure 65 million years in the making, but it was worth the wait. Spared no expense, indeed. 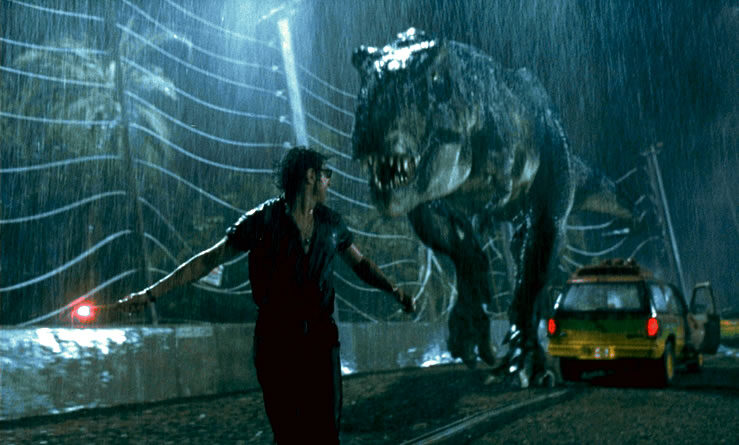