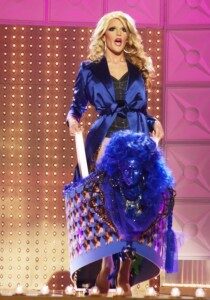 Seeing as this week’s Drag Race episode was all about Willam, it seems only fair that this article should be all about her too. Sorry ‘bout it.

If this whole show is meant to be finding “America’s Next Drag Superstar”, somebody who can step into Ru’s (fabulous) shoes, to come close they’ll need to be pretty, highly intelligent, witty, verbose and likeable, all at the same time. That’s a pretty tough bill to fit, don’t you think? By those standards, of all the queens to strut down the Drag Race runway this season, Willam is one of the top contenders for the crown (and the $100,000).

I’ll level with you; when she first got introduced in the first episode I didn’t really like her. She’s an actor, and more than a little prone to talking about all the TV shows she’s been on. She makes constant references to what it will be like “when she wins”. She’s kind of catty about a lot of the other contestants. Generally, she’s not the sort of queen I find myself rooting for.

And then everything changed. I realised that she’s kind of hilarious, and a very smart cookie indeed. She has an incredible body, and not without hard work apparently – she claims she was once over 200 lbs.  She has a real understanding of fashion and style, and as this week’s challenged showed, she’s got a pretty wide creative streak.

Also, after a Twitter conversation with a friend, I said that Willam “needed a slap”. Imagine my surprise when I woke up the next morning to discover this:

Amazing. And everything she does seems to be followed up by a snappy (and very funny) little quip.

Then during the main challenge, building a colour-themed pride float with a matching outfit, she reveals the Dolce & Gabbana coat worn by Carrie when she fell over on the catwalk in Sex & The City. “Not the actual one, cause you know she’s so much BIGGER than me!”

Finally, when the judges turn to give her feedback on her (winning) runway presentation, she introduces “the starship Willam. Amenities include Wifi….There’s a leisure deck and a business centre…”

Put bluntly, the bitch is kind of hilarious.

There are other queens present who still pose a major challenge to Willam, and definitely stronger contenders for Miss Congeniality, but if Willam is not at least in the top five, I will be genuinely surprised.