Beautiful Thing was the first gay film I ever saw. At 15 (a whole ten years ago, gulp), it was a revelation. No longer did I have to put myself in the shoes of a random Corrie character to lust over her latest love interest – right in front of me, on a mate’s VHS he’d taped off of Channel 4 no less, was a reflection of my youth. Of the awkward struggles of my sexuality, the fears of coming out, and the tender, excruciating moments of falling in love for the first time.

Little did I know, at the time, of the trailblaze the work had already left across theatreland, with successful runs from 1993 to 1996, before Channel 4 picked it up and made ‘peppermint foot lotion’ a hilarious new term in gay scene vernacular. The fondness felt for this work is embedded in it’s story – two boys on a council estate, coming of age and falling in love. It’s textbook gay drama, but Jonathan Harvey’s script makes it so much more than that, sprawling across the entire emotional spectrum  touching single motherhood, lost hope, strained relationships, abuse, unfulfilled dreams, and, most importantly deep, unbreakable love.

Suranne Jones shines, unsurprisingly  as she does in everything. She straddles the lines between the formidable and vulnerable sides of her character (one of the boy’s mother) beautifully, dishing out cutting quips alongside heartfelt moments which catch you unaware. The rest of the intimate cast (of just five) are perfect – Jake Davies and Danny-Boy Hatchard play the teenagers Jamie and Ste with ease, and you’d never guess this was Hatchard’s first role (so to speak). Support from the hilarious Zaraah Abrahams and the endlessly beautiful Oliver Farnworth (seriously, arms. ARMS) add value, depth and humour.

What struck me (re)watching Beautiful Thing was the normality of it all – that the insecurities, troubles and indeed hopes we have and face in life, are shared. There may be a difference in who we love, by why we love is the same, and perhaps, beautifully ordinary. Of all the pieces of theatre I’ve seen, I felt the deepest connection to this, but I think that’s not, as it was ten years ago, because I needed to identify with someone who had an identical sexual preference as me, rather, this time, I relish in the comfort of knowing that, as humans, we’re all in the same boat.

With discussion around gay marriage at the forefront of the political agenda here in the UK, and LGBT rights creating headlines around the world, Beautiful Thing and it’s 20th Anniversary comes at the perfect time. Ste, scared, frightened and beaten by the unseen force behind his flat door (his father), couldn’t be more of an apt metaphor for the times we live in, and what could be. As Ste leaves his pain behinds him, faces his fear and dances with the one he loves in the street, we see a a glimpse of the world we could live in – one that’s perfectly ordinary, and just a beautiful thing. 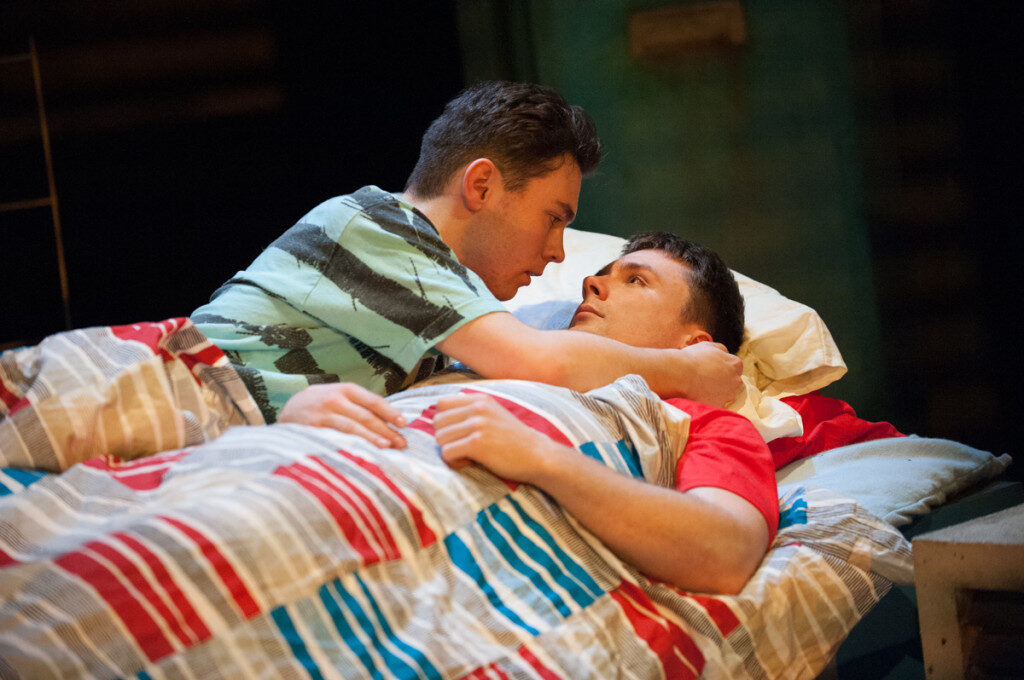