Peter Jackson, the director of The Lord of the Rings trilogy bring us another chapter from middle-earth, which sees Bilbo’s first adventure where he stumbles upon something very “precious”.

The Hobbit: An Unexpected Journey follows the adventures of Bilbo Baggins, a more reluctant hobbit who does not even like the mention of an adventure, who is swept on an epic quest by Gandalf the Grey to reclaim the lost Dwarf Kingdom of Erebor from the fearsome dragon Smaug. Lead by the legendary warrior dwarf Thorin Oakenshield, Bilbo is accompanied by thirteen dwarves on his mystical adventures into the misty mountains and beyond. Despite being the smallest member of the quest, Bilbo’s adventures soon end up changing his life in ways he could never have imagined when he meets the familiar character, to The Lord Of The Rings fans, Gollum and his “precious”. 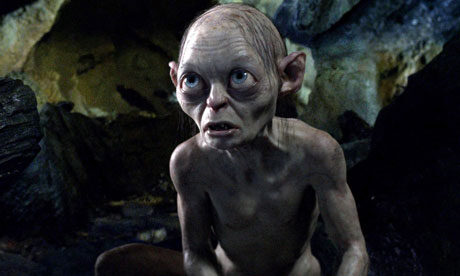 Beginning with an unexpected history lesson of the dwarves and how their beloved Erebor was taken by the ferocious Smaug, whilst the elves did nothing to help, illustrates the delicate way in which Peter Jackson has incorporated other works by Tolkien into the story of The Hobbit in order to expand the audiences understanding of the book, alongside developing the story as it stands today. The opening sequence is followed by the more familiar opening line; “In a hole in the ground, there lived a hobbit” and so the legend begins…

Despite seeming like a lesser story compared to the epic scale of TLOTR trilogy, Jackson brings to The Hobbit that which he did not manage to bring to TLOTR, humanity. The characters of The Hobbit are more human and therefore more relatable than those of TLOTR. Rather than the fearless and invincible warriors, the characters in The Hobbit are more fearful and thus more vulnerable, even Gandalf is not able to fight off Azog the terrifying great orc; leaving the dwarves, Bilbo and Gandalf no option other than to climb the trees to escape and call to the eagles to rescue them. They do not invite battle like TLOTR characters seem to, but instead only engage in battle when it is absolutely necessary. Their weaknesses are very human, especially that of greed. Gandalf also seems more mischievous as he deceives his elders; Elrond, Saruman and Galadriel, in order to continue with the quest the dwarves have set out for themselves. Thus The Hobbit is a film that brings greater satisfaction than TLOTR did to its audiences.

The Hobbit is a gripping and surprisingly fast-paced film compared to the pace of the narrative of the book. The opening sequences have been adjusted and shortened where necessary to ensure that the narrative flows at a reasonable pace. The film incorporates a lot of action, some of which has been included from other Tolkien works in order to create an action-packed fast-paced gripping film that will be enjoyed by Tolkien enthusiasts alongside other filmgoers.

Despite being focused on a creature that is so small that he could slip by unnoticed, the film does not lack any grandeur, but, rather displays a quest that will lead its characters to almost certain death, but which they face with a quiet courage alongside humour. For fans of the book, The Hobbit offers an honest, yet expanded film adaptation.  Broken into three films the second film; The Desolation Of Smaug will be released December 2013 and There And Back Again is due to be released in 2014.

With Peter Jackson directing, there are a few familiar actors/actresses returning to the set among some new faces that deliver enigmatic performances. Ian McKellen returns as Gandalf The Grey, Cate Blanchett returns as Galadriel, Ian Holm as the elder Bilbo, Christopher Lee as Saruman, Hugo Weaving as Elrond, Elijah Wood as Frodo and Andy Serkis as Gollum. Martin Freeman joins the cast as Bilbo alongside Richard Armitage as Thorin.

The Hobbit has been filmed in 3D using the latest in filmmaking technology and will be released in selected theatres nationwide in the 48 frames per second format. This means that the image will be a lot clearer and more realistic, as a human’s eye works at 60fps, compared to the 24fps format that all other films use.

With a legendary tale and state of the art technology The Hobbit proved to be the most anticipated film for December and one of the best for 2012.