There’s a new town on the map of must-see European cities.  Nestled in the Northern-central region of the Spanish Basque country is the little-known Bilbao, a beautiful riverside city with a mixed landscape of old churches and buildings ranging from the 14th century through to a raft of striking modern architecture – most notably, the iconic Frank Gehry designed Guggenheim Museum.

A stunning example of Deconstructivist architecture, the Guggenheim is a mass of titanium scales and glass, seemingly an homage to the Nervion river that it is built upon and the life within it’s waters. It is crafted into undulating flowing walls that seem to have no end and no beginning.  Standing guard at the door of the Guggenheim is the enormous Jeff Koons ‘Puppy’ (below)- an evergreen floral canine that towers above the ground with a smiling presence.  At the back of the museum by the river, another Koons sculpture resides – his ‘Tulips’ (above)– an iridescent neon stainless steel bouquet that sits across from Louise Bourgeois’ giant bronze cast spider ‘Maman’ (whom you might recall nested for a season in the Tate Modern’s Turbine Hall in 2000 as part of the Unilever series).  Above the water and running perpendicular to the museum is La Salve Bridge which looks as though it is pinched between finger and thumb by Daniel Buren’s ‘The Red Arches’ – a huge ‘art intervention’ that straddles the main thoroughfare into and out of the city. It is another of Bilbao’s calling cards – a reminder that here, art is not only to behold, but should be interactive and have presence in our everyday lives. 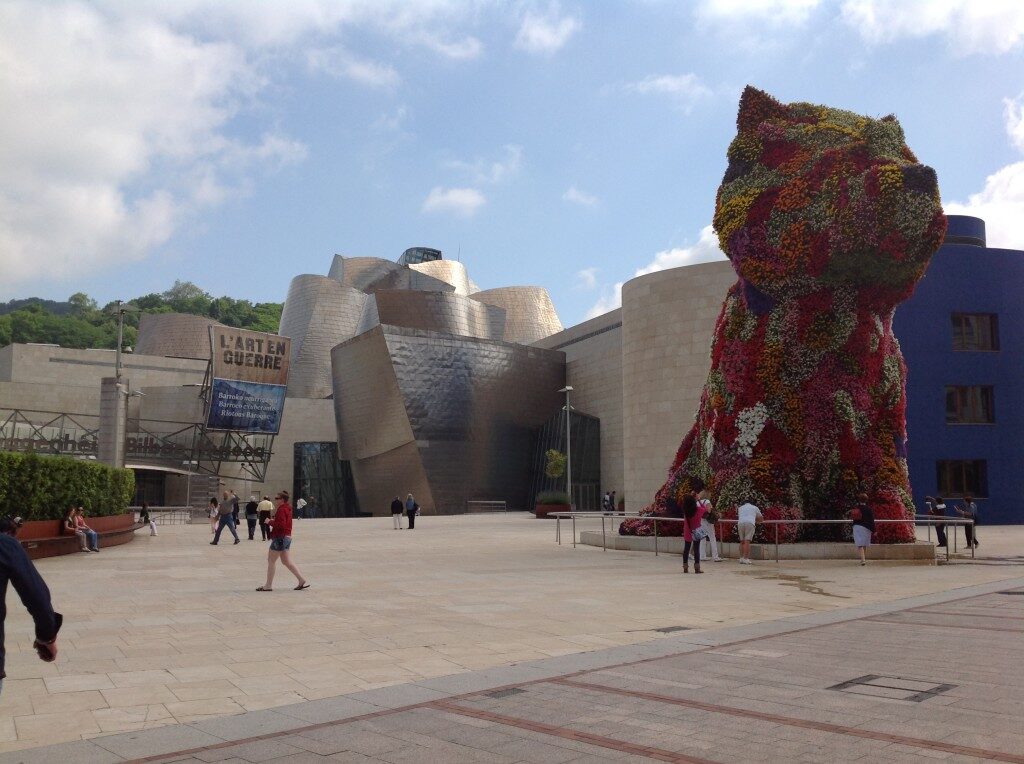 Nowhere is this more apparent than in the exhibitions inside.  Past the Jenny Holzer LED poem (below) built of illuminated words that fall like rain from roof to floor and fold into themselves as they are visually spoken, is the the first exhibition I visited, L’Art en Guerre, 1939-1947: From Picasso to Dubuffet.  In between rooms housing a substantial collection of the renowned surrealist artists (including Picasso, Duchamp, Kandinsky and Dali)– there was art from the concentration camps and it was this that really caught my attention.  If ever anyone questioned the need for art, I would urge them to come to this exhibition. On one side the surrealists demonstrating that there is no limit or structure to express emotion and reality, whilst on the other side was art from Chernobyl and the concentration camps.  Firmly defined by the physical structure that it was conceived in, it was a stark reminder that the artists here created out of a need to mark their existence.  For me, this was epitomized by Diana Thater’s 2010  ‘Chernobyl’ installation – a room with overlapping projector images of decimated video landscapes and forlorn figures walking amongst the debris – and Felix Nussbaum’s 1940 ‘Self-Portrait from the Camp’ which has him staring out with pursed lips whilst half-naked and starved figures in the background defecate and stare at the ground. If this emotion had been represented in modern film, the closest thing it would resemble is ‘One Flew Over the Cuckoo’s Nest’ where your eye is fixed on the main protagonist, hoping that just by witnessing him that the surrounding madness and injustice would disappear. His eyes in the painting will you to look at him, acknowledging what he has endured and that he cannot be erased.  As powerful, unnerving and immeasurable a document of human experience as any I have seen. 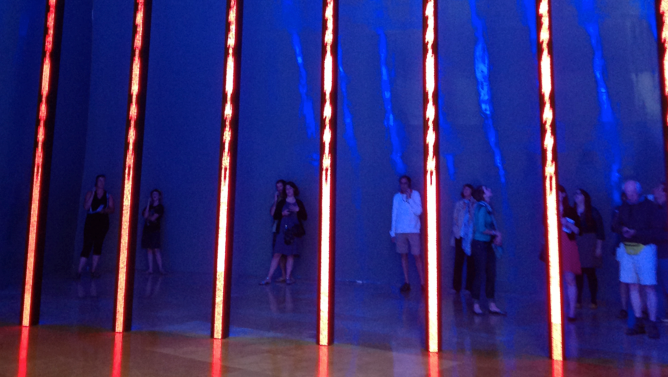 The second exhibition was Riotous Baroque – described as a ‘dialogue’ between 17th Century gothic splendour and modern art.  Initially I was skeptical about how these two eras would mix, but the aesthetic was a joyous juxtaposition that informed and ignited eachother’s purpose.  As a musician who proudly draws on gothic, industrial and classical roots and writes about both the dark and the ugly as well as the beautiful and the inspiring, I found this exhibition daring and exciting and should I make millions one day (I won’t), I will be calling in bids to Christies next time the Vanitas portrait of a Noble Woman who is half human and half skull (by ‘A German Master’) is up for auction, as frankly it would make the best album cover ever.  There was a strong theme of religion and morality in some of the paintings and this created a great backdrop for the more anarchic works that explored themes like witchraft (‘The Witches Kitchen’ by Frans Francken II), and Robert Crumb’s porn-comic strip ‘How to Have Fun with a Strong Girl’ which was down-right perverse, full of self-loathing, and seemingly the most popular artwork in the room for the gaggle of bored teenage boys that trailed around after their parents. Had Marilyn Manson’s ‘Beautiful People’ or Tool’s ‘Stinkfist’ videos been part the exhibition, they wouldn’t have been out of place.

So if the Guggenheim put Bilbao on the International map, it is the Old Town and the hospitality of the people that will keep you there. Inside the Old Town, the streets are vibrant with life and the amazing foods and wines that this region offers are exceptional.  The Pinchas (a local delicacy) are divine – small tapas style plates of food focusing on local produce such as Iberico ham, cheese, olives, squid and anchovies, served with some of the best Riojas I have tasted.  I watched children play football and men and women have coffee in the picturesque squares, whilst thinking about what I had seen while walking around the city and the Guggenheim.  Spain has been hard hit by the recession and the local news reports that over 50% of young people under 24 were out of work. It’s a shocking statistic, but this is a city that is fighting to retain it’s sense of hope and future.   Any city that actively embraces and promotes art – both beautiful and difficult – in spite of the gloomy economic situation that the whole of Europe has to contend with – is a city worth visiting. My biggest fear through the recession in the UK has been the obliteration of the niche arts and funding as we seem to chase and value art that has mainstream appeal only.   It will be sad times indeed if this is the case, so it is even more important that forward-thinking cultural cities like Bilbao are leading the march against this appetite and actively encouraging people of all ages to be inspired by it’s culture.  For that reason alone, I raise my glass and cannot wait to return to this Basque jewel. Go if you have the chance – eat the food and drink in the landscape. You will not be disappointed. Watch the below video for more:

Guest Editor Maya Fire is the songwriter and lead singer of Wax on Water and flew to Bilbao to review two stellar new exhibitions at the Guggenheim.