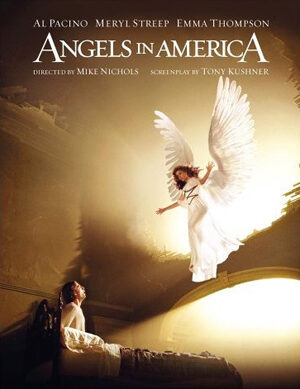 I have tried to remain relatively neutral in this blog as I like to consider it more of a directory than a review site, but for this TV series I could quite easily just list the thesaurus’ entry for ‘amazing’ and leave it there. However, I doubt this will be of much interest so I’ll try to justify myself whilst trying cling on to some crumb of objectivity.

Angels in America is a 2003 TV miniseries adaptation of the Tony Kushner play of the same name. The 6 hour epic tells the story of a group of separate yet interconnected individuals all dealing with the AIDS crisis in 80s America as well as grappling such issues as; race, sexuality, justice and religion.

The mini-series keeps many of its theatrical roots with recurrent soliloquies and scenes of farce juxtaposed with tragedy as well as abstract dream and vision sequences. The dialogue is rich and beautiful, the characters believable and nuanced, the stories joyous yet tragic. This might all sound very pretentious but I have to stress one of the reasons I love Angels in America so much is that is succeeds in pulling off such an ambitious feat without being pretentious and can be enjoyed outside of an ivory tower. Having said that, it really isn’t the average TV series and requires quite a deep level of engagement, if not commitment, but if you invest in it you will not be let down.

The performances from Al Pacino, Emma Thompson and Meryll Streep as well as from the rest of the cast are impeccable and successfully, and very interestingly, blur the lines between stage and screen acting.

You can watch the theatrical trailer here, I think the creators should be applauded for cutting down 6 hours of high drama into a 1 minute trailer alone, having said that the other 359 minutes of footage are just as gripping.