The Pittman Painters is a play based around the lives of the Ashington Artists; a group of men, mainly miners working in the Woodhorn and Ellington Collieries, who meet regularly for self improvement and education classes in the 1930’s. The play focuses around how all of their lives change after appointing painter and teacher Robert Lyon (David Leonard) to tutor them. The men soon become disinterested in the classes so Lyon encourages the men to begin painting themselves so as to develop an understanding and appreciation of art. The Pittman Painters follows the men as their work slowly gains prestige and recognition in the art world and the political, social and emotional hurdles that this brings about. 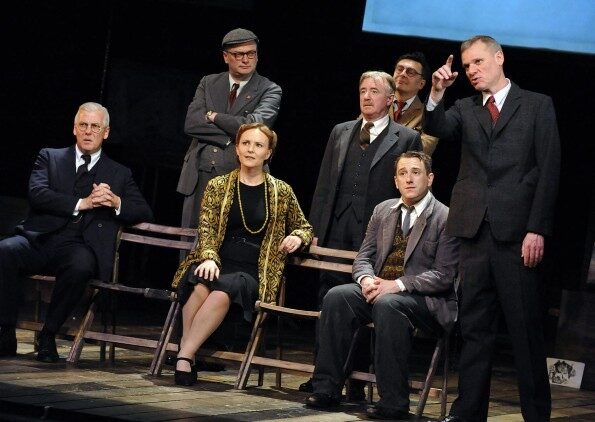 Written by Lee Hall, (Billy Elliot) and based on the real lives of these men, this play is ablaze with grittily emotional and powerful scenes, bolstered by the cast’s technically precise and passionate performances. Oliver Kilbourn (Trevor Fox) is a pivotal character throughout the play, who; being the most promising artist within the group, struggles most with the schism between living life as a painter and as an actor. Fox’s performances are powerful and moving, coinciding perfectly with the comic delivery brought by David Whittacker (Jimmy).

The arrival of tutor Robert Lyons (David Leonard) instantly creates an uncomfortable clashing of classes, which throughout the play changes to become both humorous and touching. Aside from being genuinely funny throughout, the Pittman Painters is poignant and affecting, in particular, the moment in which Jimmy talks about being in the pits at ten years old, constantly tired and terrified. When the men stand in silence whilst looking at a London exhibition, the audience relates to the men’s angry temperaments, frustrated emotions and their mocking friendships.

The Pittman Painters is certainly worth a watch; with perfect acting, a beautifully sculpted dialogue and (perhaps, for the first time I have ever seen in theatre) perfect regional accents from all the cast throughout!

The Pittman Painters runs from the 22nd August to the 27th August.