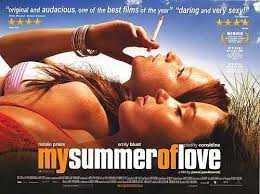 My Summer of Love is a film I have looked at again and again, thinking, ‘Ooh, Emily Blunt. I like Emily Blunt’.  But it’s never gone further than that. I always opt instead for a disc from the SATC box set, or an obscure foreign film (leaving me feeling incredibly intellectual). That all changed when I found it in my partner’s DVD collection though. Now was the time, time to settle down and see if it could meet the dizzying heights of my expectations. To be honest, I was so excited at the prospect of seeing Emily Blunt play a lezzy lady, I almost didn’t dare watch, for fear of my fragile little hopes being dashed.

My Summer of Love is the story of two young girls who engage in a summer romance. One is a precocious yet rebellious Blunt, from an upper class, often absent, family. The other is a harsh-mouthed, impressionistic and rough around the edges girl from a family of two, (her and her brother) following her mum’s passing and her dad’s continuous non-existence.

The film tracks their intense summer, their kisses in the unmistakable Yorkshire suburbs. It explores not only the burgeoning sexual discovery of the two, but also the restraints of class and upbringing, the seemingly inherent sexism in some communities, and the use of faith to apparently heal, but perhaps inevitably conceal, darker aspects of our personalities.

Throughout the film, I was transfixed. It had just the right amount of gritty Brit drama, of grey skies and dialectal assault, measured with the glossy optimism of young love. You can see from the beginning that all cannot really end well, but there is that hope, that willing things forward, and yet, that delicious promise of complete and utter catastrophe. There’s no heartbreak quite like a teen heartbreak, and it can be so well illustrated on-screen. You can see the tell-tale moments of lip-biting desire, the heart-stopping instances of panic, of fantasies overwhelming reality until the lines are blurred beyond recognition. My Summer of Love brought us all of these.

I don’t feel that the film taught me anything, or shed any new light on teen sexuality, but it was entertaining and captivating, well acted, well directed. It felt honest, even though I suppose it is fantasy.

I would reveal more of the plot, but I would rather you watched it. Go on. It’s good, I promise!