It’s been a while since Britain voted to leave the European Union in one of the most bitterly contested referendums in history. David Cameron has since stepped down from his role as Prime Minister, now replaced by Theresa May, the first female leader to occupy 10 Downing Street since Margaret Thatcher. But in the midst of the Brexit fallout, one pressing matter is still unclear – how will the leave vote affect our ability to live, work and travel within the EU?

While many voters seemed perfectly happy to wave goodbye to freedom of movement within the 27 member states, the 48% of the population that voted to remain are concerned that they will no longer be able to live and work in these countries.

German Vice-Chancellor Sigmar Gabriel has suggested that young Brits, a demographic that largely voted to remain, could be offered dual nationality if they choose to work inside the EU. Italian Prime Minister Matteo Renzi has also indicated British students enrolled at universities within the EU could be offered citizenship.

Theresa May has not offered any assurances, claiming that questions about citizenship will be an integral part of exit negotiations. Clarity is needed on the situation, but while we wait for concrete information on the matter, here are several other ways to access EU citizenship after Brexit:

It’s important to remember that, for the time being, Britain remains part of the EU and will continue to be a member state for at least two more years. To officially leave the union, Theresa May will need to invoke an agreement called Article 50 of the Lisbon Treaty. This is a legal process that gives the UK two years to negotiate its terms of withdrawal.

This means that, until Britain officially leaves the EU, freedom of movement and rights to work or study in any other EU country still apply. What will happen to those living abroad once the UK officially leaves the union is unclear, but they may well be able to stay and, in time, apply for citizenship.

For instance, one can apply for German citizenship after living in the country for eight years, provided they pass a German language skills and naturalisation assessment, among other criteria. A much shorter period of residence is needed for naturalisation in other EU countries, such as Sweden, where adults must have lived in the country for five years and children just two years. 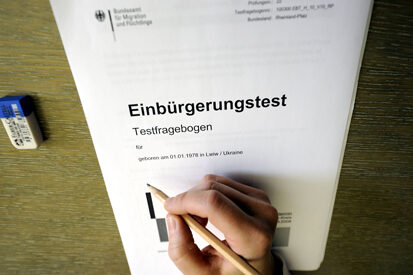 Many countries offer the opportunity to gain citizenship by investing a significant amount of money in their government fund or approved real estate projects. With a second citizenship, you can travel visa-free to a number of countries and territories, including those within the EU and Schengen zone.

Citizenship by investment schemes are also available further afield, for example many of the Caribbean nations reward investment in their emerging economies with dual nationality. The island of Dominica, for example, offers visa-free travel to around 119 countries, including the EU countries within the Schengen Area. Truly Belong, a dedicated global citizenship magazine, describes the Caribbean as one of the few places in the world that inspires serenity and encourages well being.

Trace your roots with a family tree

Another route to EU citizenship could be through your ancestry. If you have parents, grandparents or even great grandparents from one of the 27 member states, you may be entitled to claim dual nationality by descent.

For instance, Ireland allows individuals with an Irish parent to claim citizenship, regardless of their place of birth. You can also apply for citizenship through descent from Irish grandparents. This lineage can continue if each generation ensures their registration before the birth of the next generation.

Italian bloodlines go back even further – a single great-grandparent might entitle you to an Italian passport, provided nobody in the chain renounced their Italian citizenship. Lithuania also permits citizenship for great-grandchildren of its former citizens, although laws relating to the Soviet Occupation in 1940 can muddy the water.
Of course, not everybody will be able to obtain EU citizenship through these means. It is worth remembering that, although freedom of movement within the EU may soon become a distant memory, a British passport remains one of the most useful documents you can have, giving visa-free access to 175 countries.

Who Makes Cien Products For Lidl?

What HRT Does Davina McCall Use?