Last week saw the premiere of Four Stories, a short film series made in conjunction with Roman Coppola and his production company The Directors Bureau, to which TQS was priviledged with an invitation.  Commissioned in conjunction with Intel Ultrabook and W Hotels, the films showcase the best screenwriting talent from aspiring filmmakers worldwide.

The film premiere itself was held at the charming Prince Charles theatre near Leicester Square and attending by some rather glitzy guests, including Mark Kermode, Will.i.am and yours truly.  In fact the whole project has been surrounded by famous and esteemed personalities.  A competition to find the best upcoming writing talent, the entries were judged by a panel including indie filmsters Chloe Sevigny and Michael Pitt; the four winning scripts were directed by Coppola and his production company to become the features of the title, along with an extra thrown in for good measure directed by Coppola himself.

The films cover a whole host of genres and locations, providing quite a varied evening.  From romance in Modern/Love through to the surreal in Eugene, my favourite was ¡El Tonto!: economical in language, it highlighted that a good script can do more than just provide strong dialogue – it can let the cinematography shine too. Watch it in full now:

After the films was a rather swanky evening of cocktails and canapés at the W Hotel round the corner.  Drinks-wise, the overriding impression we got from the cocktails was strong, though on a secondary level they were aptly named after the features we’d just been to see and used great flavour combinations (though all I can remember is rose and prosecco, clearly sampled a few too many).   To wash down the liquor we grabbed as many canapés as we could get our hands on but which alas did little to clear my head.

The buzz at the party was that Jason Scwartzman, star of the Coppola scripted Die Again, Undead One, was making an appearance, though unfortunately we were unable to pin him down.  Probably he was scared away by our fierce assaults on the canapé trays.  We have found (online, not on our camera) photo evidence of Will.i.am at the party, which will have to do: 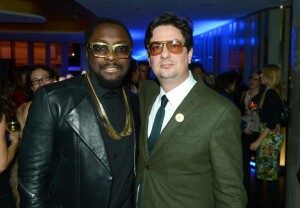