Catch up on the rest of our Downton Abbey Blog

Daisy and Mr Bates – the two characters whose lot never changes.  I pretty much huff every time Mr Bates appears on screen these days because he just can’t help but get himself into scrapes.  This week he finally managed to get one over on his mean-spirited cellmate, but I can guarantee it won’t last longer than a few days.

Daisy, meanwhile, seems destined to be downtrodden.  She finally, after about six years of asking, got the promotion and assistant she wanted, only to find she’s stuck in a love triangle and yet again lusting after a guy who has the hots for someone else.

I don’t think there’s a moment more enjoyable at Downton than when the house is graced with a new-fangled invention.  Remember the motor car?  The telephone?  Well tonight we got the most life changing yet … an electric toaster!  Oh Mrs Hughes, you saucy devil, suggesting that one might be installed for the above stairs breakfast.  The consternation on Mr Carson’s face at the contraption was actually more extreme than his dismay at Lady Edith’s political outburst.

Yes, tonight Downton had a hefty Political and Social agenda, enough so to merit the capital Ps and Ss.  There was Branson and the Ireland conflict, Edith and her outspoken letter and Ethel’s baby.  Poor Edith – everyone agrees she needs an occupation to take her mind off being a spinster and then has a go at what she chooses.  And, just to rub salt into the wounds, the family hardly batted an eyelid when her much younger sister joined in at suffragette demonstrations, aided and abetted a maid out of service and ran off with a militant Irish socialist.  Who used to be the chauffeur.  All Edith did was write a letter to a respectable newspaper but you’d think she’d started the fire at Downton.

Tom, inevitably, has got himself in trouble in Ireland.  Which seems to me to have worked out for the best as it means we get to keep him and Sybil at Downton for our own viewing pleasure.  There were a number of hypocritical decisions that have got us to this point, though.  Like the problem that underpins Tom’s involvement with the Crawley family, in that he’s happy for them to live their lifestyle but will burn family homes the second he sees the same behaviour on Irish soil.  And the fact that letting an Earl pull strings to make sure he avoids incarceration completely undermines Tom’s whole standpoint.  Doesn’t matter though, because Sybil and Branson are AWESOME.

Heartache story of the week was Ethel giving up her baby.  It was very sad and beautifully acted, but I’m afraid I’m never going to be a great fan of Ethel’s character and find it rather tedious having her back on the scene.  Although the catty Mrs Bird might make it worth our while.

“There seems to be something of the Johnny Foreigner about Catholics.”  Alright Earl, rein it in.

There’s a hot new footman!  The only thing better than the hot new footman is Thomas’s perving, but then as remarked with the American lady’s maid, Downton was lacking in downstairs eyecandy.

Next week, could Mary be pregnant? Infertile? Suffering particularly bad hayfever? Will Edith find herself a charming journalist as she enters into her new career?  And could Downton’s mismanagement get any more dramatic?  Downton 4, Financial Ruin 0 (this count is going to get mighty tiresome if that storyline has really come to an end)

And finally, look at this gem I found while “researching”: 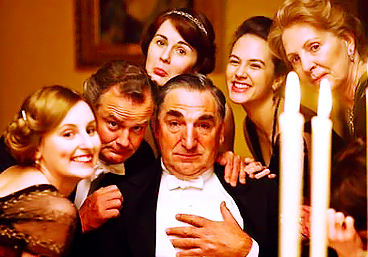