Don’t be fooled by the title of this post, it’s actually just an excuse for a cheap pun.  Although Beautiful Creatures has been slammed as a Twilight copy, this film shouldn’t be dismissed by those who’ve had enough of ‘supernatural being falls in love with mere mortal’ movies. Although this is the crux of this story, it’s got plenty of entertainment value for people who aren’t that into fantasy fiction, or completely bored with the whole Edward vs Jacob thing.

The story focuses on two high school students who fall in love in South Carolina. Lena (Alice Englert) is your average American beautiful teenage girl (who’s also like…totally a witch) and is about to celebrate her 16th birthday. However, on her birthday she will be chosen to follow the dark or light path of witchery. She’s only just arrived in the quiet town of Gatlin, where a boy named Ethan (Alden

Ehrenreich) has been having dreams about a mysterious girl for some time now. (Can you see where this is going?)

If, on her birthday, Lena is chosen for the dark side, her life will be one of cruelty and deception. However, she may be chosen for the good side of witching fence, in which case she may save the world for everyone. Either way, it’s not permissible for a Caster (as witches are known in this film) –

good or bad – to fall in love with a mortal, even if they’re especially handsome like Ethan. 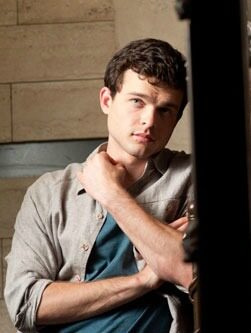 If ‘swoon’ was still an acceptable phrase outside of Mizz, I’d say it now.

Alas! Rules or no rules, these two have fallen desperately in love and they continue with their
relationship, despite her family’s objections.

The path towards young love’s dream isn’t helped by the fact that the town is very conservative and deeply religious. Ethan rebels against the town’s oppressive nature by reading banned books but at the same time is coerced into taking part in civil war re-enactments. Emma Thompson plays town busybody Mrs Lincoln, who puts plenty of spanners in the works for the young couple. Lena is

rejected by her peers in school and her and her family are labelled Satanists.

However fortunately Lena is considerably less irritating than Bella. She is no push-around, takes responsibility and the lead in decision-making.

Unlike the Twilight films, watching Beautiful Creatures doesn’t feel like you’re watching part one of a three film series. The story has a good enough conclusion to stand alone, although the door

is definitely left open for a sequel. The film is full of surprisingly unexpected twists and a credible, well thought out fantasy plot.

It’s cheesy, of course it is, but it is not without merit and is overall incredibly gripping (I was almost a bit sad when it finished). The similarities between Beautiful Creatures and Twilight are endless, however stronger character development in Beautiful Creatures makes for a much better movie.

When you’re deciding which new movies to see this month, Beautiful Creatures should go on the
possible list, rather than just being dismissed as a definite no.